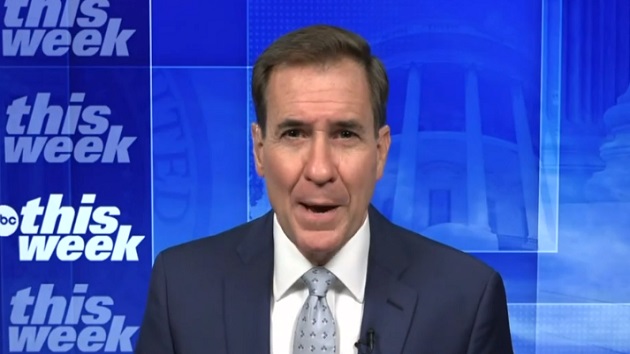 (WASHINGTON) — The White House believes “the stakes are very high right now” with Russia amid Vladimir Putin’s struggles in Ukraine and his references to his nuclear arsenal, but President Joe Biden’s warning of possible “Armageddon” wasn’t about an imminent threat, a top Biden spokesperson said Sunday.

“These comments were not based on new or fresh intelligence or new indications that Mr. Putin has made a decision to use nuclear weapons and, quite frankly, we don’t have any indication that he has made that kind of decision,” John Kirby, a spokesman for the White House National Security Council, told ABC “This Week” co-anchor Martha Raddatz.

“Nor have we seen anything that would give us pause to reconsider our own strategic nuclear posture in our efforts to defend our own national security interests and those of our allies and partners,” Kirby said, citing the president’s promise that “neither we nor our allies are going to be intimidated by this.”

Kirby’s comments come after Biden’s unusually stark remarks at a fundraiser on Thursday.

Biden said then that Putin, the Russian president, was “not joking when he talks about the use of tactical nuclear weapons or biological or chemical weapons” and that “we have not faced the prospect of Armageddon since Kennedy and the Cuban missile crisis” in the 1960s.

The White House was pressed repeatedly last week over whether Biden’s warning marked some shift in the administration’s assessment of Putin’s behavior, which Kirby denied on “This Week.”

“We are monitoring this as best we can, and we have been monitoring his nuclear capabilities, frankly, since he invaded Ukraine back in February,” Kirby said.

Raddatz asked what the U.S. saw as Putin’s “way out” of this war, where his forces have been losing ground in recent weeks in Ukraine’s eastern and southern regions. On Saturday, an explosion also partially collapsed a bridge serving as a crucial supply link from Russia to Crimea, the disputed peninsula Russia annexed from Ukraine in 2014.

“Mr. Putin started this war and Mr. Putin could end it today, simply by moving his troops out of the country,” Kirby said, adding, “We all want to see this war end. … And what needs to happen is for the two sides to be able to sit down and negotiate and find a way out of this peacefully and diplomatically.”

But, so far, “Mr. Putin has shown no indications — zero, none — that he’s willing to do that,” Kirby said. And so, he said, the administration remained committed to indirect involvement in the war by supporting Ukraine via weapons and other military aid.

On the Ukrainian side, President Volodymyr Zelenskyy has ruled out negotiating with Putin specifically — not Russia — and signed a decree formalizing that position on Tuesday.

Raddatz also pressed Kirby on the White House’s approach to North Korean leader Kim Jong Un, who launched a barrage of ballistic missiles in recent days, including over Japan, raising alarms there and in South Korea.

“I’ve seen this for decades and decades, the same thing happens through many presidents: You respond, you do drills, he keeps firing,” Raddatz said.

“What are you doing differently?” she pressed.

Kirby pointed to intelligence gathering and “military readiness” between the U.S., Japan and South Korea: “We’re going to make sure that we have the capabilities in place to defend our national security interests if it comes to that.”

But direct talks with Kim’s regime remained the goal, he said: “We want to see the denuclearization of the Korean peninsula, verifiable and complete … We are willing to sit down with them without preconditions at the negotiating table to work toward that end.”

Democrats rally without ‘any reservation’ around Biden’s expected 2024 campaign