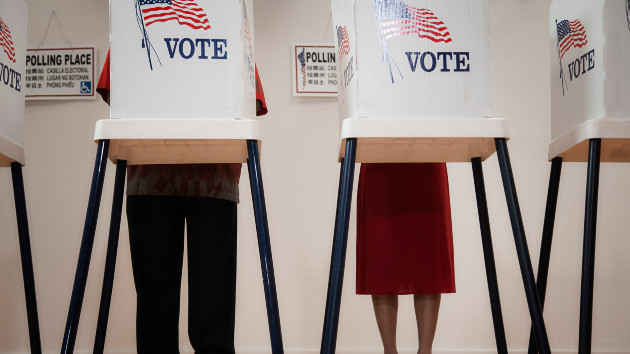 (WASHINGTON) — Democrats pushed back against historic trends in the 2022 midterms, overcoming broadly negative economic attitudes and Joe Biden’s unpopularity to hold more seats than typical in the face of such headwinds.

Their competitiveness came down to a variety of factors — support for abortion rights, negative views of Donald Trump, rejection of election denial, broad backing from young voters and surprising strength among independents among them. The result was a battle in the trenches, district by district and state by state, for House and Senate control.

The hurdle for Democrats was high with 76% in ABC News exit poll results rating the economy negatively, 24 percentage points more than two years ago when Biden took office and 45 points more than in the last midterms four years ago. Additionally, 47% said their own finances have gotten worse in the last two years, the most dating to 1982 and just 44% approved of Biden’s work in office, among the lowest midterm presidential approval ratings in 40 years.

All those typically produce deep losses for the party in power. Yet the Democrats bucked the trend. Even with several Senate seats and House control unsettled in the wee hours, it was clear they’d dodged the level of damage usually associated with this extent of discontent.

Abortion was one factor. It ranked a strong second as the top issue — behind inflation — and voters who picked it went for Democratic candidates by 76-23%. Among all voters, the Democratic Party led by 53-42% in trust to handle abortion. Six in 10 said it should be legal in all or most cases, up 9 points from just two years ago, as many were critical of the U.S. Supreme Court decision eliminating the constitutional right to an abortion. In fact, women were 11 points more apt than men to cite abortion as their top issue, but women did not turn out, nor vote Democratic, in larger than usual numbers.

Then there were young voters, age 18 to 29. Within this group, 44% picked abortion as their top issue, twice as many as those that picked inflation. Among voters age 30 and older, far fewer named abortion as their top issue – just 25%. While young people made up about 12% of voters — their typical midterm turnout — they voted Democratic by 63-35%, as in a winning Democratic year.

On another front, days before his pending announcement of another run for the White House, rejection of Trump was as broad as it was of Biden: 58% saw Trump unfavorably, with 56% feeling the same of Biden.

Other results pointed to election confidence. Countering election denial, 79% of voters were confident in the fairness and accuracy of the elections in their state. A plurality, 47%, were very confident, and those very confident in their elections backed Democratic candidates by 70-28%. Further, voters by 61-35% said Biden was legitimately elected. The House vote among that majority was 74-24%, a 3-1 Democratic margin.

Then there were independents. Nationally, in strong Republican years, they break for the Republican Party — by 7 points in 2016, 14 in 2014 and 19 in 2010. This year, independents split 49-47% between Democratic and Republican House candidates.

While 93% of Democrats said Biden was legitimately elected, so did 64% of independents, while only 28% of Republicans felt this. And among independents who accepted Biden as legitimate, 68% voted Democratic for House — another result that helped stanch the party’s potential losses.