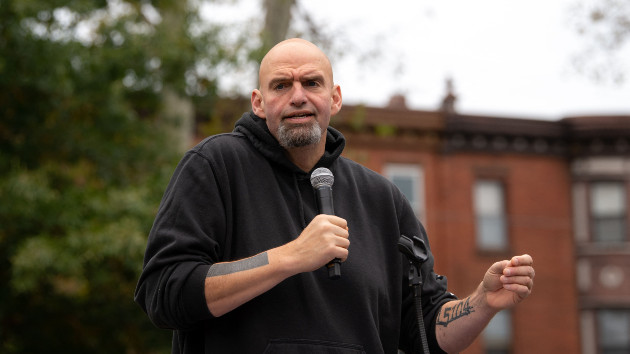 (WASHINGTON) — Republicans and Democrats are sifting through the aftermath of the first and only debate in Pennsylvania’s marquee Senate race to determine if Democrat John Fetterman’s performance — on his biggest stage some five months into his recovery from a stroke — will move the needle against him in an era when candidate faceoffs are becoming a moribund exercise.

A final answer will come soon enough, with Election Day less than two weeks out and more than 600,000 people having already cast early ballots.

But, operatives said, a widely seen development such as a poor debate performance can change race dynamics even in the closing stretch of a campaign: fueling new ads, driving up fundraising, drawing headlines and more.

Fetterman, Pennsylvania’s lieutenant governor, joined Republican Mehmet Oz, a cardiothoracic surgeon and former TV host, on Tuesday night in Harrisburg for the debate, which opened with heightened media attention because of Fetterman’s stroke in May.

Above the moderators hung two monitors to transcribe the questions and Oz’s answers in real time, to aid Fetterman. He has said the stroke affected his speech and ability to process spoken language — symptoms that outside neurologists said do not indicate cognitive issues for stroke survivors.

The two contenders, running in a race that could decide party control of the currently 50-50 upper chamber, fielded questions on policies ranging from fracking to abortion to crime during the hourlong debate.

On stage Fetterman was quick to acknowledge the “elephant in the room” — his stroke, which he said caused him to miss and sometimes “mush” words — and he said that overcoming a health challenge made him like so many other Pennsylvanians.

But while he touted his recovery and his resiliency, his halting, repetitive speech and auditory symptoms seemingly made it difficult for him to articulate his views and proposals, including on inflation, and he stumbled in responding to a follow-up question on fracking, for example.

Party experts split by partisanship on whether or not the public would be swayed, though.

“There’s no doubt that Fetterman struggled with his words at times, but I don’t think that’s what will move undecided voters,” Pennsylvania Democratic strategist Mike Mikus countered. “Undecided voters already had plenty of time to weigh whether he was capable to do the job. It’s going to come down to the issues they care about, and I still think Fetterman wins on November 8.”

The debate over the debate was sparked when Fetterman fumbled while answering several questions, including about his record on crime as mayor of Braddock and his reversal on fracking, a core if environmentally controversial part of Pennsylvania’s economy for which he once backed a moratorium.

“I was able to stop gun violence for five and a half years as mayor — ever accomplished before since my time as mayor because I’m the only person on this stage right now that is — can successful about pushing back against gun violence and being the community more safe,” Fetterman said.

Other comments were more fluid, but Fetterman consistently dropped words or spoke in a choppy cadence — leaving Republicans to pounce and Democrats to spin.

“It was really bad for Fetterman. Worse than I thought,” said Pennsylvania GOP consultant Josh Novotney.

“I watched the debate last night. It was hard to watch, frankly,” Sen. Chris Coons, D-Del., said on CNN Wednesday. “At the end of the day, they’ve got a pretty stark choice between John Fetterman, who looked uncomfortable in a suit and tie, whose answers were at times halting, but who is authentic and will fight for working families in Pennsylvania and who’s got a real and strong record as lieutenant governor and mayor to run on. And they will contrast that with Mehmet Oz, who looked very comfortable in a tailored suit, who’s very good on television.”

In a sign that Republicans smell blood in the water after the debate, Make America Great Again Inc., former President Donald Trump’s super PAC, rolled out a $870,000 ad buy in Pennsylvania highlighting worries around immigration and crime raising questions of Fetterman and President Joe Biden’s fitness for office.

“Biden is stumbling around, and Fetterman just isn’t right,” the narrator says in the ad, which was first reported by Fox News.

Among Democrats, the aftermath sparked questions over whether Fetterman should have even agreed to debate Oz in the first place.

“No,” one Pennsylvania party strategist, granted anonymity to discuss the race frankly, said when asked if Fetterman should have appeared. “No upside.”

“I think you have to put him out there and have him answer some questions,” Pennsylvania Democratic consultant Mustafa Rashed said, referencing concerns over Fetterman’s health after the stroke.

After the debate, his campaign almost immediately and forcefully insisted on their victory.

“For a guy who’s just been in the hospital months ago, he took it to Dr. Oz pretty f—— hard tonight,” Fetterman spokesperson Joe Calvello said Tuesday before later announcing that the campaign had raised more than $2 million in the day after the debate.

And Democrats were able to knock Oz on abortion after he said Tuesday that while the federal government shouldn’t have a role in restricting the procedure, “I want women, doctors, local political leaders, letting the democracy that’s always allowed our nation to thrive to put the best ideas forward so states can decide for themselves.”

Fetterman’s team swiftly cut video of the comment into an ad, which Biden later shared.

“If Dr. Oz gets his way, where does this end? Would he recommend local officials make decisions about cancer treatments? Colonoscopies? Or is this kind of scrutiny reserved just for women?” Biden tweeted.

Later Wednesday, when ABC News’ Cecilia Vega asked press secretary Karine Jean-Pierre if Biden had ever raised health concerns about Fetterman, Jean-Pierre said: “The president, in his personal conversations with the lieutenant governor, finds him to be an authentic, really brave individual.”

Outside disability advocates also described the scrutiny of Fetterman’s performance as ableism, a form of prejudice.

“Equating an auditory processing disorder, or what others might describe as aphasia, with a lack of intelligence or cognition is commonplace and bigotry,” said Luke Visconti, chairman of the National Organization on Disability. “This bullying is a key factor in preventing roughly half of the almost 200,000 Americans under 65 who have a stroke from returning to work.”

How permanently the debate may shift voter attitudes remains unclear.

Such events are becoming a vanishing breed, with candidates in states across the country increasingly opting out of something that can be hard to win but easy to lose, operatives said.

“It’s high risk, low reward. You spend a lot of time preparing for it, the [return on investment] isn’t really there,” Rashed, the Democratic consultant, said. “The high risk is that you make a gaffe and it turns into a social media meme or something else that’s untoward. And … I think candidates are viewing it as there’s just not a lot of upside in doing these things.”

The race between Fetterman and Oz was already tightening, with FiveThirtyEight’s polling average showing Fetterman’s lead dropping from 7 points a month ago to about 2.3 points as of Wednesday.

Democrats who spoke to ABC News disagreed on whether the debate would have an impact, with many saying not enough people would care or some suggesting Oz’s abortion remarks could turn voters off.

“Regular partisans will stay in their corners, as the reactions make clear,” the anonymous Democrat said.

“In a close race,” said Keith Naughton, a GOP strategist with extensive experience in Pennsylvania politics, “a disastrous debate performance like John Fetterman had is enough to tip the scales against him and probably will.”

When asked about the debate, voters were torn.

“I’m not sure if Mr. Fetterman’s people should have him in this race. I feel bad for him,” said Tom Lawlor, a lawyer and a Democrat who said he’s still undecided on who to back. “If my decision had to be made today, I think I would lean for Dr. Oz.”

“Okay, he has a little bit of trouble talking. His mind is okay. I mean, if it affected his mind in some way, I could say okay, but he’s still a smart guy. Has nothing to do with his speech,” Richard Ferro, a retiree from Pittsburgh said of Fetterman’s performance.

How does the Biden classified documents matter compare to Trump’s?