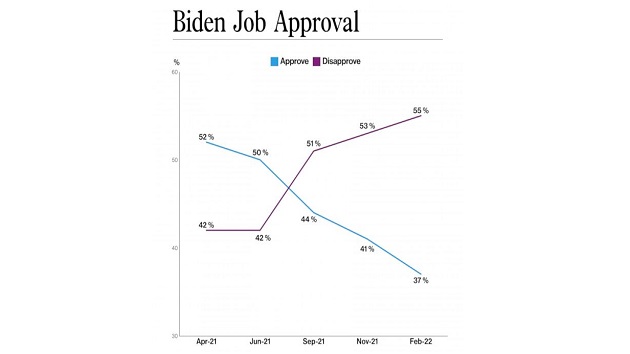 (NEW YORK) — Economic discontent is hurting President Joe Biden and his party’s midterm election prospects, with six in 10 Americans reporting inflation hardships, three-quarters saying the economy’s in bad shape and a nearly 20-point lead for the Republican Party in trust to handle it.

Biden has other problems, with underwater ratings for his handling of the invasion of Ukraine, a split on the pandemic and weak scores on personal attributes including leadership, handling a crisis and mental sharpness.

But 40-year-high inflation leads his headaches: Americans are twice as likely to say they’re worse off than better off under his presidency, by 35-17%

The result: A career-low 37% of Americans approve of Biden’s job performance overall, with 55% disapproving. That includes just 30% approval among political independents and 10% from Republicans. Even in his own party, nearly a quarter of Democrats either disapprove of Biden (19%) or are withholding judgment (4%).

Analyzing data going back to Harry Truman’s administration, only two presidents have had approval ratings this low heading into their first State of the Union address, which Biden delivers Tuesday. Those two were Donald Trump, at 36%, and Gerald Ford, at 37%. Disapproval has been higher, by a nonsignificant 3 percentage points, only for Trump. (More were undecided about Ford, then just five months in office.)

Biden’s fortunes in turn spell trouble for his party in this poll, produced for ABC by Langer Research Associates. Republican congressional candidates have a 49-42% advantage over Democrats among registered voters, widening to 54-41% among those who say they both are registered and certain to vote in November.

The result among registered voters is very similar to what it was in November, 51-41% — as reported at the time, the largest Republican lead in midterm election vote preferences in ABC/Post polls dating back 40 years. In the new data, among independents who are registered to vote — often swing voters — GOP candidates lead by 14 points.

These results are buttressed by a shift in partisan self-identification. In four ABC/Post polls from January through September last year, Democrats outnumbered Republicans by an average of 7 points. In November and again in this poll, by contrast, it’s a nonsignificant 1 point.

In line with vote preferences, Americans by 50-40% say they’d rather see the next Congress controlled by the Republicans, to act as a check on Biden, than by the Democrats, to support Biden’s agenda. The Democrats led by 16 points on this measure going into Trump’s midterm in 2018, when they won 40 seats. It looks more now like it did under Barack Obama in 2014 and 2010, when the Republicans won 13 and 63 seats, respectively.

Seventy-five percent of Americans rate the economy’s condition as not so good or poor, the most in ABC/Post polls since 2013. The public by a 3-1 margin says it’s gotten worse rather than better since Biden took office, 54-17% (with the rest saying it’s stayed the same). That “gotten worse” number is more than double what it was when measured during Trump’s presidency in 2019 (22%) and 11 points higher than under Obama in 2012.

Personal impacts are apparent as well. As noted, just 17% report being better off financially now than when Biden took office; twice as many, 35%, are worse off. A negative score on this measure has reliably indicated political trouble since Ronald Reagan popularized the concept in his successful 1980 presidential campaign. Among other notable instances, it was negative for George H.W. Bush on his way to losing re-election in 1992, and damaging to Obama early in his presidency as the country struggled out of the Great Recession.

To be sure, there’s a political aspect to economic attitudes, particularly when the president is mentioned by name. Fifty-four percent of Republicans say they’ve gotten worse off under Biden; only 9% of Democrats go there. But it’s 42% among independents, and among Democrats, just 33% say they’re better off.

Even with the comparatively robust job market, inflation is a singular irritant. Fifty-nine percent say it’s caused hardship for their household; 30% of those call it a serious hardship, rising to 43% of those with annual household incomes less than $50,000, a group that encompasses four in 10 adults. Tellingly, Biden’s approval rating is down 24 points among these lower-income earners since last June, compared with an 8-point drop among those with higher incomes. (In other groups, Biden’s lost 21 points among young adults and 18 points among moderates.)

He has a 37% approval rating among all adults for handling the economy, matching his overall job approval; 58% disapprove, a steep 21-point hole. More troubling for his party, Americans trust the Republican Party over the Democrats to handle the economy by 54-35%.

Notably, Biden doesn’t take all the heat for inflation. Fifty percent assign him a great deal or good amount of direct blame for it; more blame corporations trying to increase their profits — 68% — and disruptions from the pandemic, 73%. Nonetheless, with 7.5% annual inflation on his watch, even if indirectly, Biden gets blowback.

Other Issues and Attributes

The economy is the big issue, but not the only one, and on others the Democrats fare less poorly. Americans divide 43-37% between the parties in trust to handle the pandemic, a slight 6-point Democratic lead, and 44-41% in trust to handle education and schools, not a significant difference.

There’s also the matter of Biden’s personal attributes, which track generally with his approval overall. Forty-three percent say he can be trusted in a crisis; 52% think not. Just 36% call him a strong leader, down 7 points since last measured during the 2020 campaign; 59% don’t see him this way. And 40% think he has the mental sharpness it takes to serve effectively, down 11 points from spring 2020; 54% think not.

Finally, given his problematic ratings, just 14% of Americans say they’d be more likely to vote for a congressional candidate Biden has endorsed, compared to 32% less likely. That 18-point net negative score almost exactly matches the net negative impact (19 points, 18 vs. 37%) of an endorsement from another political figure — Biden’s predecessor, Donald Trump.

This ABC News/Washington Post poll was conducted by landline and cellular telephone Feb. 20-24, 2022, in English and Spanish, among a random national sample of 1,011 adults, including 904 registered voters. Results have a margin of sampling error of 4.0 percentage points, including the design effect. Partisan divisions are 27-26-40% for the full sample, Democrats-Republicans-independents, and 27-27-39% for registered voters.

The survey was produced for ABC News by Langer Research Associates of New York, N.Y., with sampling and data collection by Abt Associates of Rockville, Md. See details on the survey’s methodology here.