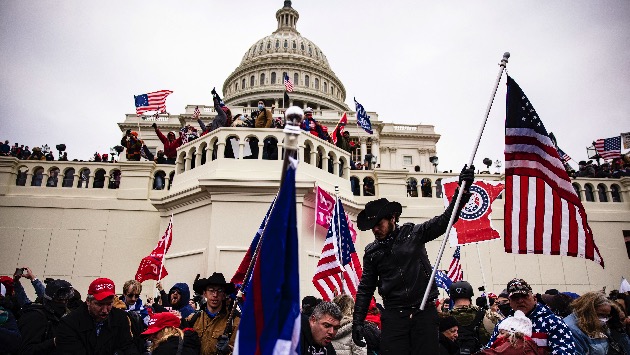 (WASHINGTON) — Jury selection was set to begin Monday morning in the case of Guy Reffitt, who faces five felony counts in the first trial of an alleged participant in the Jan. 6 attack on the U.S. Capitol.

The stakes are high for prosecutors because the trial will be closely watched by hundreds of other Jan. 6 defendants who have yet to enter into plea deals with the government.

It marks a significant turning point for the Justice Department nearly 14 months into its sprawling criminal investigation of the attack, and depending on the outcome, could prompt guilty pleas or encourage defendants to fight in court.

Reffitt, a 49-year-old man from Wylie, Texas, a suburb of Dallas, is one of several Jan. 6 rioters accused of possessing a firearm while on Capitol grounds. Prosecutors say he traveled from his home in Texas to Washington with an AR-15 rifle and Smith and Wesson .40 caliber pistol, though he is only alleged to have carried the pistol in a holster during the riot itself.

He was seen in pictures and videos with the mob outside the West Front of the Capitol, wearing body armor, a helmet and carrying flexicuffs, prosecutors said.

He allegedly “confronted Capitol Police officers” on stairs just north of the temporary scaffolding that had been put up in advance of the Biden inauguration. At one point he allegedly charged at police, but was stopped after they shot him with two different types of less-than-lethal projectiles and then pepper spray. After returning home following the riot, Reffitt is alleged to have threatened his children if they reported him to law enforcement.

Reffitt has been held in pre-trial detention since arrest on Jan. 16, 2021, due to his alleged dangerousness to the general public. Reffitt’s trial will take place at the D.C. District Court in Washington, D.C. Jury selection is expected to last a day or two.

In a recent filing, prosecutors said they expect to call 13 witnesses in Reffitt’s trial. This will include representatives from Capitol Police, the FBI, Secret Service, a counsel to the Secretary of the Senate, Reffitt’s son and daughter, and a fellow member of the Three Percenter militia who traveled with Reffitt to D.C. and has been granted immunity for his testimony.

Reffitt is not alleged to have entered the Capitol, but prosecutors are looking to persuade a jury that he joined with hundreds of others in the mob seeking to disrupt Congress’ certification of Biden’s election win.

Reffitt’s attorneys tried and failed to get Judge Friedrich to dismiss the charge against him that he sought to obstruct the certification — the felony charge that is one of the most crucial to Justice Department’s prosecution of the riot and which has been leveled against more than 275 other defendants. The charge itself carries a maximum sentence of 20 years in prison.

Reffitt’s attorney, William Welch, has argued there are several deficiencies in the government’s case. Specifically, he has sought to argue that Congress’ convening on Jan. 6 to certify the results of the 2020 election should not count as an “official proceeding” under law, and that there is no evidence Reffitt acted “corruptly” with the intention of disrupting lawmakers discharging their duties that day. Welch has also argued Reffitt’s comments to his family that he was charged for were merely “idle threats,” and noted that Reffitt’s wife and daughter both have said they never feared for their personal safety despite his comments.

Reffitt spoke to ABC News from jail in December, saying, “This has been disastrous for me and my family, especially for my girls, my son — actually, all of my family.” He also said he believes he’ll be exonerated at trial. “It’s not that hard to prove that I didn’t do anything,” Reffitt said. “It should be pretty easy.”

According to recent filings in the case, prosecutors will look to underscore the dangers that the pro-Trump mob posed to lawmakers, former Vice President Pence and American democracy itself as they attacked the Capitol that day.

At the trial, first-hand accounts from government officials as well as a mountain of video are expected to be shown. Photo and audio evidence that they’ll use to implicate Reffitt as they paint a picture of an American man radicalized to carry out an attack against his own government and the rule of law.

Perry won’t recuse himself from possible GOP investigation of Jan. 6 probe investigating him