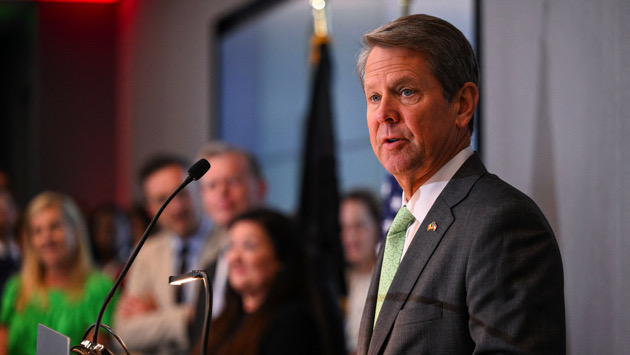 Kemp’s testimony was recorded remotely and then presented to the jury Monday, WSB reported.

Evidence from his office was also due to the grand jury Monday.

A spokesperson for Kemp told ABC News, “Out of respect for the grand jury process, we will not provide any comment until the proceedings are complete.”

According to a copy of the subpoena obtained by the Atlanta Journal Constitution, the Fulton County district attorney’s office was specifically seeking “any document that explains what former President Trump was thinking or doing or those working on his behalf.”

The subpoena was also seeking “logs of the telephone calls from former President Trump or anyone representing him or his interest,” the AJC reported.

Kemp and Georgia Secretary of State Brad Raffensperger, both Republicans, resisted pressure from Trump to “find” enough votes to swing the election in his favor, as the then-president requested during his now-infamous January 2021 phone call.

Kemp’s testimony to the grand jury was delivered on the same day the judge overseeing the probe disqualified Fulton County DA Fani Willis from investigating one of the state’s 16 alleged “fake electors,” because the DA held a fundraiser for his political opponent. Georgia state Sen.

Burt Jones, currently the GOP candidate for lieutenant governor, was one of the 16 alleged “fake electors” identified last week as a target of the Georgia probe.

The alleged fake electors were said to be part of a Trump campaign effort that assembled “groups of individuals in key battleground states and got them to call themselves electors, created phony certificates associated with these fake electors and then transmitted these certificates to Washington, and to the Congress, to be counted during the joint session of Congress on January 6th,” according to the House committee investigating the Jan. 6 attack on the Capitol.

The grand jury in the Fulton County probe does not have the ability to return an indictment, and can only make recommendations concerning criminal prosecution. Another grand jury would be needed in order to bring any charges.

Cheney says she’ll campaign against Lake, Mastriano because of their election denials