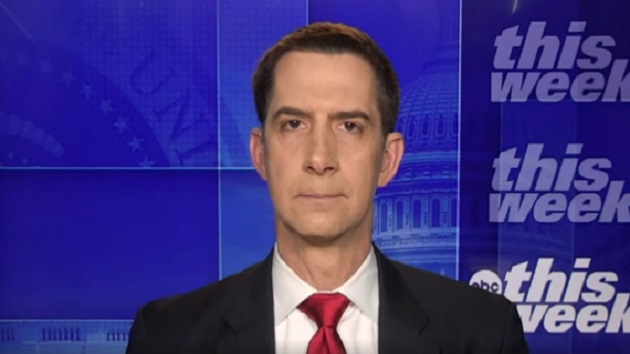 “George, if you want to know what Donald Trump thinks about Vladimir Putin or any other topic, I’d encourage you to invite him on your show,” Cotton told ABC “This Week” anchor George Stephanopoulos on Sunday. “I don’t speak on behalf of other politicians. They can speak for themselves.”

Trump called the actions of the Russian president “genius” and “savvy” during an interview with the conservative radio program “The Clay Travis & Buck Sexton Show” on Tuesday. And on Saturday night at the Conservative Political Action Conference, Trump finally condemned the invasion but also said, “The problem is not that Putin is smart, which of course he’s smart. But the real problem is that our leaders are dumb.”

Stephanopoulos pressed Cotton, who he noted has been steadfast in his opposition to Putin, to condemn the comments.

“Why can’t you condemn that? I feel quite confident that if Donald — that if Barack Obama or Joe Biden said something like that, you’d be first in line to criticize them,” Stephanopoulos said.

Cotton, who sits on the Senate Intelligence and Armed Services committees, doubled down.

“Again, George, if you want to talk to the former president about his views or his message, you can have him on your show,” Cotton said. “My message to Vladimir Putin is quite clear: He needs to leave Ukraine unless he wants to face moms and teenagers with Molotov cocktails and grandmothers and grandfathers with AK-47s for years to come.”

“I simply don’t understand why you can’t condemn his praise of Vladimir Putin,” he said.

“George, again, I don’t speak on behalf of other politicians, they can all speak for themselves,” Cotton responded, ​again dodging Stephanopoulos’ question. “I’m delivering my message to you, which I said has been clear, whether Barack Obama was president, whether Donald Trump was president, and now whether Joe Biden was president, that Vladimir Putin has been a ruthless dictator for years. Too many people have not taken the threat seriously. And that’s why you see the images we see in Ukraine now. And where we need to focus is on stopping that aggression, supporting the Ukrainians as best we can.”

In an earlier interview on “This Week,” Oksana Markarova, the Ukrainian ambassador to the U.S., pleaded for American businesses to stop backing Russian-owned enterprises both at home and abroad.

Cotton agreed with the ambassador, encouraging “every American company to scrub all of their operations to provide no support whatsoever to Vladimir Putin’s regime” while Russia continues carrying out an “unprovoked war of aggression.”

“But we can do more than prayers and hashtags and lighting up buildings, George. It’s time for the president and some of our European partners to quit pussyfooting around,” Cotton later added. “The financial sanctions announced last night are riddled with loopholes.”

The United States and other Western nations announced Saturday they would significantly escalate restrictions against Russia’s financial system. Sanctions against major Russian banks, members of the Russian elite and Putin had already been imposed by the United States and its allies. The U.S. and other nations have also stepped up military aid to Ukraine. The countries, however, have yet to launch crippling sanctions against Russia’s oil and gas industry, which Cotton has been advocating for. Russia provides more than a third of Europe’s natural gas.

Putin announced Sunday he had ordered his military to put Russia’s nuclear deterrent forces in a state of heightened readiness in response to what he called “aggressive statements” from NATO countries.

“It’s time to remove all Russian financial institutions from the international payment system. It’s time to impose sanctions on his oil and gas exports which he uses as his primary means of financial support,” Cotton said. “We need to rush those weapons that were announced for delivery yesterday to the front: anti-tank, anti-aircraft missiles, sniper rifles ammunition, fuel supplies, it should have been done weeks ago so better later than never but the Ukrainians have no time.”

How does the Biden classified documents matter compare to Trump’s?