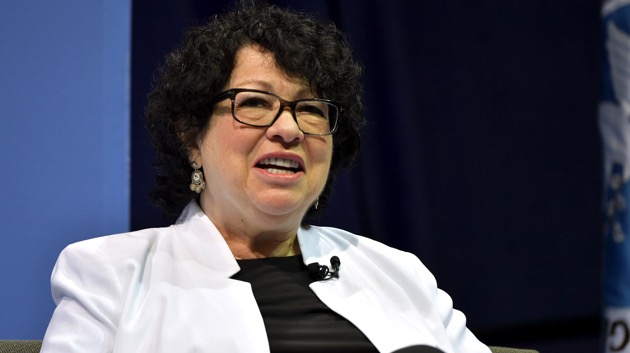 (WASHINGTON) — As a Supreme Court confirmation battle looms, Justice Sonia Sotomayor delivered a sobering warning Wednesday about intensifying partisanship that she says puts the court’s independence at the brink of crisis.

“As norms of the nomination process are broken, as more senators, congressional representatives, governors, mayors, local politicians, and the media question the legitimacy of the court,” she said, “the threat is greater and unprecedented than any time in our history.”

Sotomayor, who is poised to become the court’s most senior liberal justice when Justice Stephen Breyer retires this summer, made the unusually pointed public remarks in a high-profile virtual appearance for New York University Law School.

“The more partisan the voting becomes, the less belief that the public is likely to have that Congress is making a merit-based or qualifications-based assessment of judicial nominees,” Sotomayor said of the Senate confirmation process.

An ABC News/Ipsos poll late last month found more Americans believe politics — rather than the basis of law — guide most of the court’s decisions. Public approval of the court has also slumped to near historic lows in Gallup polling, down double digits from just over a year ago when approval was near a two-decade high.

President Joe Biden is said to be pursuing a nominee who can draw bipartisan support in part as an effort to dial-down the partisanship around confirmations.

Sotomayor said the divisive and politically polarizing process has harmed perceptions of the court’s impartiality, and also suggested it may be directly affecting the court’s functioning on the inside.

“The emphasis to pick nominees with extensive writings and publicly expressed views on precedents of the court can be viewed as a way –and can be viewed by the public as ways — to control a judge from changing his or her mind,” Sotomayor said in what was widely seen as a veiled reference to groups like the conservative Federalist Society, which has sought ideological uniformity in nominees.

“We have an obligation to keep open minds,” she said, “that we are willing to change with time and experience. If we don’t show it, people will believe — perhaps wrongly — that we are just political creatures and not independent judges.”

“The history of the court has been filled with justices changing their doctrinal views over time,” she added.

Many of the court’s conservatives have adopted a different view, vowing adherence to originalism and textualism which resists evolution in interpretation based on changing circumstances in society and the law.

Sotomayor did not directly address recent public controversies involving her colleagues, but at one point she did appear to offer veiled critiques of Justice Neil Gorsuch’s closed-door speech to the Federalist Society last week and growing questions about Justice Clarence Thomas’ potential political conflicts.

“Most appointed judges have friends and people they know in the political arenas. Ending relationships is not required,” she said, “but care by judges and ensuring that contacts do not give the impression of undue influence or endorsement is necessary.

“We must also be sensitive to not prejudging cases in speeches,” she continued. “We have a wonderful vehicle — our opinions — to set forth our judicial views. Speeches on legal issues, if not done carefully, can give the appearance of undue influence by groups we choose to give speeches to.”

What is the George Floyd Justice in Policing Act?