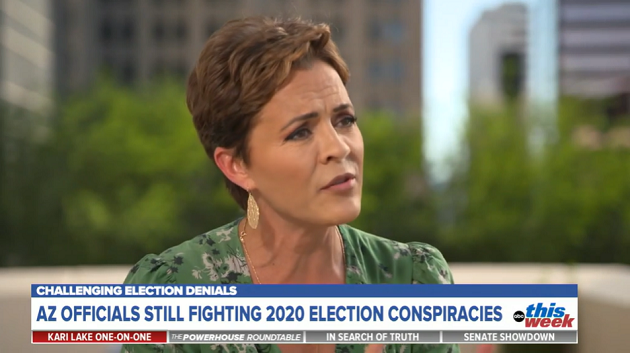 (WASHINGTON) — In an interview on ABC’s “This Week” on Sunday, Arizona Republican gubernatorial nominee Kari Lake would not explicitly commit to accepting the outcome of her upcoming election if she loses to her Democratic opponent.

“If you lose, will you accept that?” Bash ultimately asked, to which Lake replied again: “I’m going to win the election, and I will accept that result.”

Lake has frequently campaigned on the false claims that the 2020 presidential race was fraudulent — at times wielding a sledgehammer, claiming it’s for suspect electronic voting machines. She raised the subject of the 2020 race in her interview with Karl, wrongly alleging that “2,000 mail-in ballots were accepted by Maricopa County after Election Day in 2020, after Election Day.”

Maricopa County election officials told ABC News that no ballots were accepted after the deadline on Election Day in 2020. Some ballots that were scanned the next morning — giving them a post-election timestamp — were turned in to the office on Election Day, the officials said.

In her interview, Lake offered other unsubstantiated and disproven claims about Arizona’s 2020 race. At one point Lake said she wanted to discuss other topics, but Karl noted she was the one who raised the previous election.

“We’ve been talking about a whole bunch of other things,” Karl said, later adding: “I didn’t ask you about 2020, you brought it up.”

Despite the litany of allegations, no evidence of widespread fraud was found in the state that now-President Joe Biden won by 10,457 votes.

Biden’s national victory over Donald Trump was likewise confirmed by multiple audits and hand recounts; judges and local officials from both parties said they found no notable issues.

“Just to be clear, the Republicans on the Board of Supervisors, the Republican governor, now the Republican candidate for Senate running along with you [Blake Masters], the Republican attorney general under Donald Trump, Bill Barr, all said that … the election was not stolen,” Karl told Lake, who blamed baseless “corruption.”

He pressed her on her attacks on the past ballots, asking if she would take sweeping action to reject voters in her state.

“You said something last week, you said that there were 740,000 ballots with no chain of custody, those ballots shouldn’t have been counted,” Karl said to Lake, asking, “Are you really saying you would throw out the ballots of 740,000 — nearly three-quarter of a million Arizonans?”

“740,000 ballots violated chain of custody requirements in Maricopa County,” Lake answered, repeating a claim made in her interview with CNN.

Maricopa County election officials refuted Lake’s allegations and referred ABC News to a May statement where the office said the county always had control of the ballots, adding they “were sealed in envelopes that, in turn, were sealed in boxes that the couriers were prohibited from opening.”

As Lake has been particularly critical of early mail-in voting, Karl asked if she would seek to change the Arizona election laws, specifically early voting and mail-in voting, if she is elected governor over Democrat Katie Hobbs, who is currently the secretary of state.

Maricopa County Recorder Stephen Richer told ABC News that 85% of voting in the August primary was by early voting and in 2020, it was 91%.

Karl asked again if she would seek to limit early voting. “There’s a lot of it in this state,” he said.

“Going back to when I first started voting back in the ’80s, we had Election Day. Our Constitution says Election Day,” Lake replied. “It doesn’t say election season, election month … And the longer you drag that out, the more fraught with problems there are.”

Hobbs, Lake’s rival, revealed last week that a voter registration error caused up to 6,000 Arizona voters to get mail ballots with only federal races and not local races. In her interview on “This Week,” Lake pivoted to blaming Hobbs for that error, calling her “incompetent.”

“She was the one who pointed this out and said she’s correcting it,” Karl said.

Hobbs’ office is working to address the issue and released a statement Wednesday saying that the problem affected less than a quarter of 1% of voters.

Hobbs will be the one to certify the upcoming elections, given her role as secretary of state. She has not stepped aside from those duties, though Lake has said that she should.

In a separate interview this week, Karl spoke with Hobbs, pressing her on that: “Will you recuse yourself from the certification process?”

Hobbs wouldn’t answer the question directly but said she was “having these discussions right now” and didn’t “want to talk about a hypothetical” with the outcome of the election being unknown.

She diverted to attacking Lake’s election denialism. “What I think is really important here is that Kari Lake has based her whole campaign on these election lies, continues to say that Donald Trump won in 2020,” Hobbs said, adding that her office “is going to be up against a barrage of legal challenges” from Lake should she win the governorship.

Polls show Hobbs and Lake are locked in a tight race, with much of their messages focused on immigration and the southern border; abortion access and extremism; the economy and public safety.

Speaking with Lake, now a rising star in her party, Karl asked if she would consider joining Trump as the running mate on a 2024 presidential ticket. Calling herself “the fake news’ worst nightmare,” Lake vowed to serve two full terms if elected.