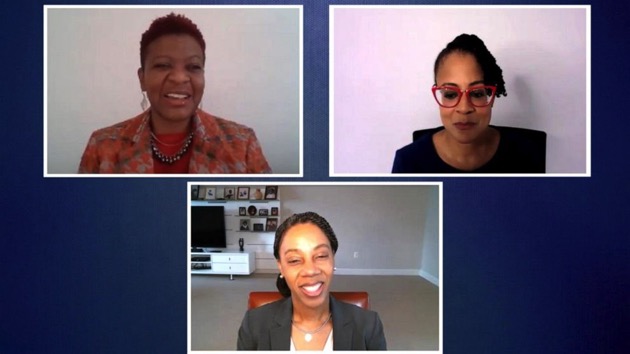 (WASHINGTON) — When Ketanji Brown Jackson last month to the U.S. Supreme Court, some of the loudest cheers came from a trio of women who have been by Jackson’s side for the last 30 years.

“It was a lot of screaming and jumping and so excited,” Nina Simmons told ABC News of the reaction she and her friends had to the nomination of Jackson, their college roommate.

Lisa Fairfax, another roommate of Simmons and Jackson, said of the exact moment Biden introduced Jackson as the nominee, “That moment was emotional, watching her actually stand behind the president when she was introduced and then watching her step forward.”

If the Senate approves her nomination, Jackson, currently an appellate court judge, will make history as the first Black woman to sit on the nation’s high court.

By her side through her history-making judicial career have been Fairfax, Simmons and Antoinette Coakley, all of whom roomed with Jackson as undergraduate students at Harvard University, and then as law students, also at Harvard.

The three women are accomplished in their own right — Simmons is senior counsel at Washton & Gitto LLC; Fairfax is the Presidential Professor of Law at the University of Pennsylvania Law School; and Coakley is a professor of law at Northeastern School of Law — but they said they saw early on that Jackson would reach the top of her profession.

Jackson, now a 51-year-old mother of two, stood out for her ability to bring people together, according to her friends.

“Ketanji can organize something, bring people together and she recognizes the strength of everyone and makes sure that you recognize your strengths as well,” said Simmons, who recalled Jackson’s support when she was diagnosed with breast cancer in 2014.

“One day I woke up and Ketanji and Lisa are at my door,” said Simmons. “That was a time where I wasn’t telling people. I wasn’t really sharing it, and she showed up, didn’t ask any questions, she just showed up.”

The friends, who nicknamed themselves “the ladies,” also recall a lighter side of Jackson, whom Biden described as “an exceptionally qualified and historic nominee.”

“I think people don’t know that she’s funny, and that she’s an amazing storyteller,” Coakley said.

Added Simmons, “She loves to dance. [When] we were in college and law school, we’d be the first ones out there. She’d be dancing, having a good time.”

And even as their careers took them to different places following law school, Coakley, Simmons and Fairfax said Jackson rooted them onto success.

“I’m now a law professor and Ketanji was actually instrumental in helping me make that transition,” Fairfax said. “She really made me feel like I could do it, supported me through the process.”

“For Ketanji, it was not sufficient just for her to be successful,” added Coakley. “She wanted for all of us to be successful as well, and so we all benefited, I think, from that relationship and that has sustained us all these years.”