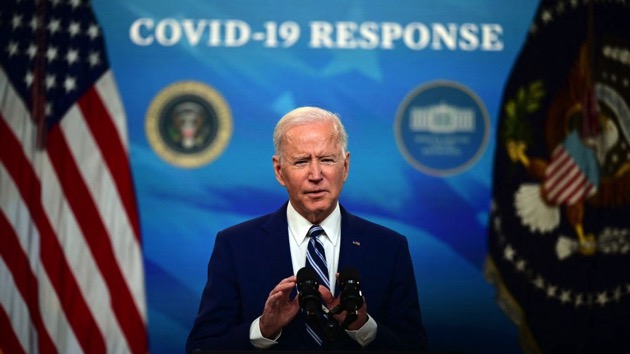 (WASHINGTON) — With President Joe Biden’s $15.6 billion request for COVID-19 relief stalled in Congress, the federal government plans to begin significantly cutting the number of viral treatments available to the states, according to internal planning documents obtained by ABC News, which show a decrease of some 30%.

The drawdown, which begins Monday, includes monoclonal antibodies that have been shown to work against the omicron variant. Their ability to curb hospitalization rates, particularly among unvaccinated high-risk patients, has made them a key component in Biden’s COVID plan.

Weekly allocations of the monoclonal antibody Sotrovimab from GSK and Vir Biotechnology will be cut from 52,250 to 35,000 through at least the next three weeks, according to the documents, which were verified by two people familiar with the situation.

Weekly allocations of Eli Lilly’s recently authorized monoclonal Bebtelovimab, which has so far worked against both the omicron and BA.2 subvariant, will be cut from 49,000 to 30,000 doses.

The White House has also warned that antiviral pills from Pfizer and Merck could run out by September if the government doesn’t place more orders soon.

Also starting Saturday, unordered doses in each distribution cycle will be reclaimed and reabsorbed into the federal inventory for later redistribution, according to the planned allocation schedule. The monoclonal Evusheld, which is meant for highly vulnerable groups like immunocompromised people to protect them even before exposure to the virus, will be allocated on a monthly basis, and unordered doses will be swept up at the end of each month, starting March 31.

This new supply policy comes as the COVID funding cuts threaten to force the government to ration lifesaving drugs.

The White House has warned that with funding stalled in Congress “critical COVID response efforts” will grind to a halt; absent that cash infusion, the nation will not be able to keep up with testing, supplies of antibody treatments, boosters and antiviral treatments.

A new purchase of hundreds of thousands more monoclonal courses planned for next week will also be canceled. The White House predicts the U.S. will fully exhaust the supply by May.

“The allocation projections are subject to change and should be used for planning purposes only,” the planning document advises. “Of course, the COVID-19 environment remains dynamic.”

Free COVID test website will be relaunched by federal government