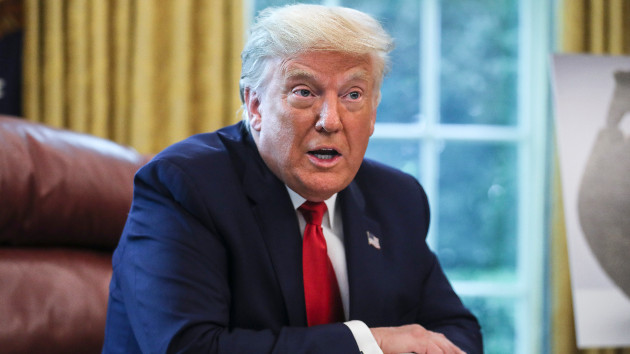 (WASHINGTON) — The chairman of the House select committee investigating the Jan. 6 attack on the U.S. Capitol said Monday it was “too early” to know if the probe has been impacted by the discovery that Donald Trump took boxes of presidential records with him when he left the White House last year.

National Archives officials confirmed Monday that the agency recently retrieved 15 boxes of presidential records from the former president’s Mar-a-Lago Club in Florida that were “improperly” removed after the end of his time in the White House.

According to National Archivist David Ferriero, representatives for Trump are “continuing to search” for more records that may have been improperly taken from the White House.

Sources tell ABC News that the documents, which were retrieved last month, included communications between Trump and North Korean leader Kim Jung Un, as well as a letter from former President Barack Obama to Trump that was left as per custom ahead of Trump’s inauguration.

Officials say the records should have been transferred to the National Archives and Records Administration (NARA) from the White House at the conclusion of the Trump administration in January 2021, as required by the Presidential Records Act.

“NARA pursues the return of records whenever we learn that records have been improperly removed or have not been appropriately transferred to official accounts,” Ferriero said.

The Washington Post first reported the news of the records being retrieved from Mar-a-Lago.

A spokesperson for Trump did not respond to ABC News’ request for comment.

Last month the U.S. Supreme Court paved the way for the House committee investigating Jan. 6 to access hundreds of National Archives records as part of its probe.

Committee chairman Bennie Thompson, D-Miss., told ABC News that it was “too early” to know how Trump’s handling of White House records has impacted the committee’s work to date — and whether it has prevented investigators from obtaining key documents and records.

Thompson on Monday said the committee “would not hesitate” to make a criminal referral to the Justice Department if lawmakers determine that Trump willfully violated the Presidential Records Act.

“We will continue to review, and if the review shows that a referral is warranted, we won’t hesitate to do it,” Thompson said.

As previously reported by ABC News, House investigators have discovered that Trump had a habit of shredding documents, notes and other White House records into little pieces that at times left aides scrambling to pick them up off the floor of the Oval Office, sources said.

“The destruction of documents, the reports of large quantities of documents in Mar-a-Lago, all point to a violation of the record-keeping requirements, and the tearing up certainly seems like a willful violation of the law,” committee member Adam Schiff, D-Calif., told ABC News.

“We’re going to look at how we can have a more effective mechanism of ensuring compliance,” Schiff said. “There is substantive concern about it, and it’s not a concern that began in the last administration, but it certainly has reached a new height.”