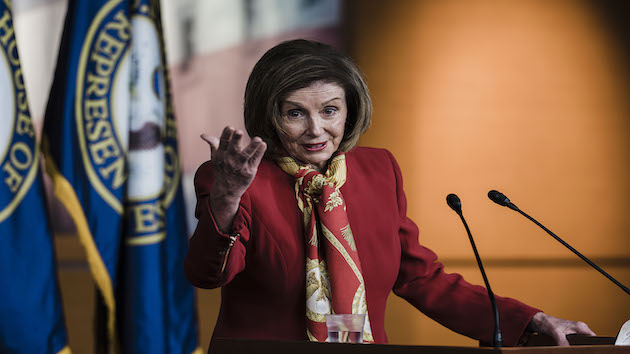 (WASHINGTON) — House Speaker Nancy Pelosi had a stark warning for Russian President Vladimir Putin as the Russian military buildup near the Ukraine region showed no signs of slowing on Sunday.

“The fact is that we think that an assault on Ukraine is an assault on democracy,” Pelosi told George Stephanopoulos during an exclusive interview on ABC’s “This Week.” “We understand that the loss of life, the damage, the collateral damage to civilians, to military and the rest are severe.”

“If he decides to invade, the mothers in Russia don’t like their children going into what he’s had to experience that — forgive the expression — bodybags from the moms before, so he has to know that war is not an answer. There’s very severe consequences to his aggression, and we are united in using them.”

Pelosi said the U.S. has to be prepared for any potential invasion, and she believes sanctions have acted as a deterrent thus far.

“And the president’s made it very clear: There’s a big price to pay for Russia to go there. So if Russia doesn’t invade, it’s not that he never intended to, it’s just that the sanctions worked,” Pelosi said.

“I’m very proud of what the president has done. The unity of our allies and NATO to come to an agreement as to the severity of the sanctions is very, very important. And that is, that is something that Putin should pay very close attention to,” Pelosi added.

Pelosi noted that while President Joe Biden has the authority to issue sanctions by executive order, “it would be better” if Congress did so through legislation.

The Senate has been negotiating a Russia sanctions bill, but as of last week, lawmakers concluded that they had hit an “impasse” in their talks. Senators have said they will continue to negotiate while also considering “other” options.

On the domestic front, Pelosi defended passing historically massive spending bills to address the coronavirus and infrastructure, which some say has contributed to rising costs across the U.S.

She noted that legislation the House passed recently to better compete with China, as well as the long-stalled Build Back Better Act, would help with supply chain issues and improve the economy in the long run.

“The fact that people have jobs always contributes to increase in inflation. And that’s a good thing. But inflation is not a good [thing],” Pelosi said.

“There has to be a cumulative effect, a cumulative effect and part of the consequences of all of that investment in the infrastructure bill the rest, is that more people have jobs and and, therefore, inflation goes up,” Pelosi said.

“The BBB is a deficit reduction bill,” Pelosi added. “The [Joint Committee on Taxation] says that BBB will reduce the national debt by $100 billion in the first 10 years and a trillion dollars in the second 10 years.”

She urged Democratic Sen. Joe Manchin of West Virginia to understand Congress’ role in addressing inflation as opposed to contributing to it, which he claims passing the BBB will do.

“It’s very important for us to address it. We must bring it down and but is not. It’s not right — with all the respect in the world to my friend Joe Manchin — it’s not right to say that what we’re doing is contributing to inflation because it is exactly the opposite,” Pelosi said.

Stephanopoulos also pressed Pelosi on the rate of rising crime in America and noted the differing opinions among some members of Congress as to how to address the issue. Some have called for an increase in the police force, while other members, such as Democratic Rep. Cori Bush of Missouri, have supported the “defund the police” movement.

“Well, with all the respect in the world for Cori Bush, that is not the position of the Democratic Party,” Pelosi said of the “defund the police” movement, which calls for a reallocation of money from police forces to local community organizations and non-policing forms of public safety.

“Community safety, to protect and defend in every way, is our oath of office,” Pelosi said. She pointed to the “The George Floyd Justice in Policing Act of 2021” as an answer to rising crime. The legislation is a human rights and police reform bill drafted by Democrats. The legislation aims to combat police misconduct, excessive force and racial bias in policing. The House approved the measure in 2020 following Floyd’s murder, but it is stalled in the Senate.

Stephanopoulos also pointed to Biden’s low approval rating as Democrats gear up for the upcoming midterm election this November. He asked Pelosi if she is concerned about losing the majority given the high number of Democrats who have already announced they are not running for re-election.

“I don’t agonize. I organize,” Pelosi countered. “We fully intend to win this election. Nothing less is at stake.”

“Forget history,” Pelosi said to Stephanopoulos when he pointed to historical election results during a midterm year. “We’re talking about the future….We have every intention every single day to do everything in our power. We have decided to win and that’s what we will do.”

Asked by Stephanopoulos if she intends to run for speaker again, Pelosi quipped: “That’s not a question. My purpose right now is just to win that election. Win that election, nothing less is at stake than our democracy.”

Pelosi delivers final press conference ahead of departure as speaker: ‘Thank you’