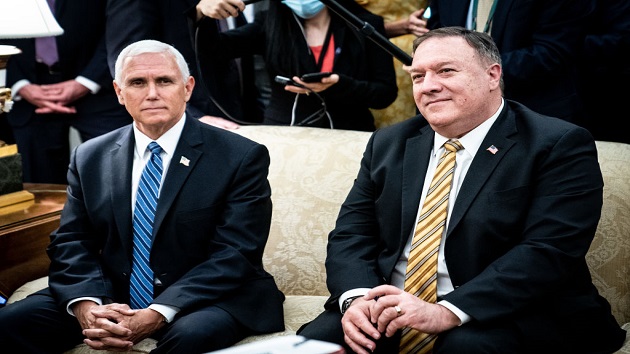 (LAS VEGAS) — As the Republican Party continues to reel from its disappointing midterms showing, prominent conservatives are participating in this weekend’s Republican Jewish Coalition’s leadership meeting.

The annual meeting in Las Vegas is a popular stop for party figures looking to connect with a key voting bloc. With midterms in the rearview mirror and focus shifting to 2024, a host of potential Republican presidential candidates will take the stage this weekend.

Former President Donald Trump, who announced his 2024 candidacy this week, will give virtual remarks on Saturday.

On Friday, former Vice President Mike Pence and former Secretary of State Mike Pompeo outlined their visions for the party.

Despite underperforming in key battleground states during the midterm elections, Pence celebrated Republicans winning majority control of the House and the end of House Speaker Nancy Pelosi’s leadership.

“Thank you for all you did to ensure Republican victories across this country and thank you for electing a new Republican majority in the United States House of Representatives and ending the speakership of Nancy Pelosi,” Pence said.

House Republicans are already moving full steam ahead with investigations into the Biden administration and his family. This week, Reps. Jim Jordan of Ohio and James Comer of Kentucky pledged to “pursue all avenues” of wrongdoing and called probes into the president’s family a “top priority.”

Pence said congressional oversight had a “critical role” but also urged the party to create an “optimistic” agenda in time for the 2024 cycle.

“It’s important to make the argument against the administration’s policies in public debate,” he continued. “I truly do believe that to win the future, we as Republicans and our elected leaders must do more than criticize and complain. We must unite our party around a bold optimistic agenda that offers a clear choice and lays a lasting foundation for victory in 2024 and beyond.”

Pence largely avoided any direct criticism of Trump in his remarks.

Pompeo, meanwhile, made an effort to separate himself from Trump. He referred to a Washington Post headline that declared he was one of Trump’s most loyal cabinet members.

“I did everything that I could to be loyal to the oath I took when I raised my right hand. It was for the country,” he said. “It wasn’t loyalty to a person, a party or faction, it was to you and the promise we had made to the United States of America.”

Pompeo was also not shy about teasing a possible run in 2024, alluding to a future presidential debate with Pence.

“Who knows, the next time we’re together, we might be on stage with multiple podiums,” he said.

Addressing the GOP’s midterm underperformance, Pompeo said he wished Republicans had “done better” at the polls.

“Personality and celebrities aren’t going to get it done. We can see that,” he said.

Maryland Gov. Larry Hogan took the toughest tone on Friday, saying what should have been a red wave “was barely a ripple.”