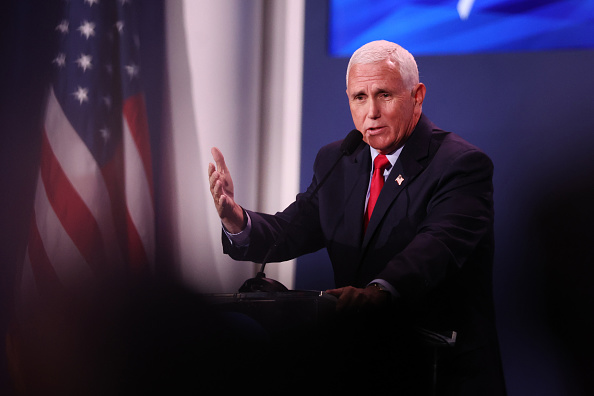 Their remarks are the latest round of rebukes after Trump met with the pair — in what he insisted was an inadvertent group meal — last week at his Mar-a-Lago resort in Florida, news of which broke over the holiday and sparked outcry soon after Trump announced his third presidential campaign.

Fuentes has a history of racist, sexist and antisemitic comments and has been banned on all major social media platforms.

The dinner was attended by Fuentes, Ye — who recently lost major business deals over his own antisemitic remarks — and Florida Republican political operative Karen Giorno.

“It was wrong and inappropriate to have that meeting. White supremacy has no place in our nation’s culture. It’s antithetical to everything we stand for as Americans,” retiring Sen. Rob Portman, R-Ohio, said Monday.

“I think it’s been clear there’s no bottom to the degree to which President Trump will degrade himself and the nation,” Romney said.

Their comments marked some of the first by congressional Republicans, who were largely silent about the dinner over the holiday weekend but were faced with questions by reporters in the halls of Congress on Monday.

Kevin McCarthy and Mitch McConnell, the GOP leaders in the House and Senate, respectively, have not spoken publicly about the dinner. McCarthy is a legislative ally of Trump’s. McConnell has previously criticized Trump over the Jan. 6 insurrection but declined to comment on the Mar-a-Lago meeting.

Trump has maintained that meeting with Fuentes was not intentional: He said in multiple statements that he only sought to meet with Ye and that the rapper brought Fuentes to the two-hour dinner without his knowledge. He also said he did not know who Fuentes was when Fuentes came to Mar-a-Lago.

Some Republican lawmakers on Monday declined to criticize Trump directly but said the meeting was still wrong and that it indicates Trump is not being served well by his aides.

“That’s just a bad idea on every level. I don’t know whose advising him on his staff, but I hope that whoever that person was got fired,” said Senate GOP Whip John Thune of South Dakota.

Others took a different view.

Sen. Josh Hawley, R-Mo., said, “I suppose he can have dinner with whomever he wants. I wouldn’t have had dinner with him.”

And Sen. Lindsey Graham, R-S.C., said “the meeting was bad” but accused the press of a “double standard” because he said that Democrats didn’t face similar coverage when associating with polarizing figures. Still, he said, “I think Trump should be talking about what he did as president and how he could fix the problems that America is living with, and any day he is not doing that is a bad day for him.”

“President Trump was wrong to give a white nationalist, an antisemite and a Holocaust denier a seat at the table, and I think he should apologize,” Pence told NewsNation in an interview.

The dinner and Trump choosing not to directly denounce Fuentes, as the controversy has unfolded, also became fuel for criticism from Democrats.

“For a former president to sit down and have dinner with an antisemite is disgusting and dangerous,” Senate Majority Leader Chuck Schumer of New York said Monday. “To give an antisemite even the smallest platform much less an audience over dinner is pure evil. Even assuming the former president didn’t realize Mr. Fuentes was coming to Mar-a-Lago, for him to refuse to condemn Fuentes and his bigoted words after the dinner is appalling and it is dangerous.”

The White House, too, has weighed in.

“We should all be condemning this, and we should be very clear, very clear and say it in really absolute clear terms,” press secretary Karine Jean-Pierre told reporters on Monday. “This is something that we condemn, and we will continue to speak out against.”