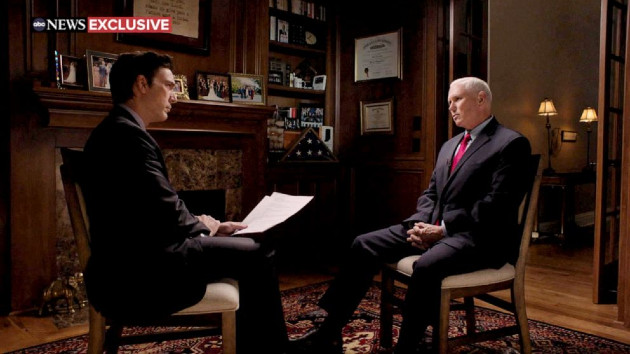 “You walk down that narrow hallway you know well from the vice president’s office to the Oval to the small dining room… And what does the president say to you?” Muir asked Pence.

“Well, he immediately asked about Karen and Charlotte. He said that — he had just learned that they were at the Capitol that day,” Pence said of his wife and daughter.

“I told him we were […] fine. And then he asked, ‘Were you scared?’ I said, ‘No, I was angry.’ We had our differences, and I told him that seeing those people ransacking the Capitol infuriated me. And I sensed genuine remorse by the president,” Pence said.

Muir asked if Trump apologized for putting their lives in danger.

“Not in so many words, but in sentiment — he did, David… If you get my meaning. I sensed the president was genuinely saddened by what had happened, and he expressed it,” the former vice president said.

In an exclusive interview at the former vice president’s home in Indiana, Muir also pressed Pence on whether Trump should ever be in the White House again, whether Pence will run for president, whether Trump hurt Republicans in the midterms, and what Pence makes of authorities saying classified documents were taken from the White House.

Pence was overseeing Congress’ certification of the 2020 Electoral College results on Jan. 6, 2021, when a large crowd urged on by Trump marched to the Capitol and then overran security and vandalized the building, sending Pence and congressional lawmakers into lockdown.

Trump, who has insisted he did nothing wrong, ultimately told the rioters to leave but only after berating Pence for not blocking the certification — which Pence noted he couldn’t legally do — and repeating baseless conspiracy theories about widespread fraud in the 2020 election.