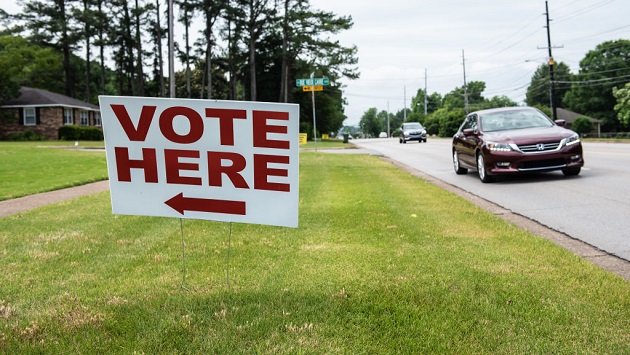 (WASHINGTON) — May ends with another round of notable primary elections on Tuesday, this time in Alabama, Arkansas, Georgia and Texas.

The most-watched races will be in Georgia, with primaries for governor and the Senate.

The results should give more insight into the strength of former President Donald Trump’s endorsement as well as the conservative appetite for the “big lie.”

Here is how the news is developing. All times Eastern. Check back for updates.

ABC News projects that in the Texas Republican primary runoff, incumbent Attorney General Ken Paxton will win. As of 9 p.m. Eastern, with 29% of the expected vote in, Paxton leads with 66% of the vote, while George P. Bush follows with 34% of the vote.

This race was both a test of Trump’s endorsement and the power of political dynasties, in this case: the Bushes.

Paxton received former President Donald Trump’s endorsement in July 2021 but went into the runoff engulfed in scandals that include indictment for securities fraud, FBI investigations into malfeasance and marital infidelity, among others. He denies all allegations.

His opponent was Bush, who is George H. W. Bush’s grandson and son of former Florida Gov. Jeb Bush. He is the only member of his famous family still in public office, currently serving as commissioner of the Texas General Land Office.

ABC News projects that Rep. Marjorie Taylor Greene is the winner of the Republican primary in Georgia’s 14th Congressional District.

Greene edged out five Republican competitors and overcame a legal challenge to her reelection despite her turbulent tenure in Congress.

As ABC’s Hannah Demissie reported, a group of Georgia voters said that Greene was not eligible to run for reelection due to her alleged involvement in the Jan. 6 attacks on the Capitol, citing the 14th Amendment. Georgia Secretary of State Brad Raffensperger agreed in early May with the court’s recommendation that Greene is allowed to stay on the ballot.

All polls are now closed

The final polls of the night have closed in Arkansas and Montana.

In Arkansas, voters are picking their party’s nominees for governor and Senate. In Minnesota, there is a special election to choose a replacement for Rep. Jim Hagedorn, who died in February.

Trump personally courted Perdue to challenge Kemp after the governor refused to indulge his baseless claims about the 2020 election. Despite the former president’s backing, Perdue consistently lagged in polling and fundraising against Kemp.

Kemp’s presumptive victory sets up a rematch between him and Democrat Stacey Abrams, who ABC News has projected to win the Democratic nomination for Senate. Their bitter 2018 race for the governorship was decided by less than 55,000 votes. Abrams admitted defeat but said she refused to call it a “concession,” citing tactics she said were used to suppress the vote.

Polls are now closed in Alabama and most of Texas.

In Texas, all eyes are on a runoff election between Democrat Rep. Henry Cuellar and immigration attorney Jessica Cisneros in the state’s 28th Congressional District. Cisneros is backed by the progressive wing of the party, while Cuellar has maintained support from the Democratic establishment despite his anti-abortion stance.

In Alabama, Sen. Richard Shelby’s retirement has resulted in a competitive Republican primary between Rep. Mo Brooks, attorney Katie Britt and former Army helicopter pilot Mike Durant. Brooks initially won former President Donald Trump’s endorsement in the race, but later lost it after suggesting it was time to move on from the 2020 election. Trump has not made another endorsement in the contest.

Abrams’s victory in the primary means November’s general election could be a rematch between her and Gov. Brian Kemp. Kemp defeated Abrams in 2018 by a very narrow margin that she claimed was influenced by tactics that suppressed the vote.

Following her election loss, Abrams turned to advocacy and founded a voting rights group in Georgia. She’s credited as a main figure in helping Democrats flip the state from blue to red in the 2020 election cycle.

Polls have closed in Georgia, where voters are picking their party’s nominees in several highly-watched Senate, House and gubernatorial primary elections. Anyone already in line as of the 7 p.m. close will still be able to cast a ballot.

The Peach State has a fraught history of long lines and voting issues on Election Day, but Secretary of State Brad Raffensperger told reporters Tuesday afternoon that “everything so far has been smooth sailing.”

Candidates must receive more than 50% of the vote to win the nomination, or they will face a runoff race on June 21.

Former President Donald Trump has gone all-in on Georgia, where he’s desperately trying to oust sitting Republican officials who pushed back on his baseless claims about the 2020 presidential election.

Democrats Jessica Cisneros and Henry Cuellar, who are competing in a runoff election for a South Texas congressional seat, issued statements after 14 students and one teacher were [killed in a shooting] () at Robb Elementary School in Uvalde, Texas.

“This is a devastating tragedy,” Cisneros wrote on Twitter. “How many more mass shootings do children have to experience before we say enough? Sending my condolences to the children and families in Uvalde who are experiencing this unthinkable tragedy.”

Cuellar said he was “heartbroken” and urged the public to come together to support the community.

Stacey Abrams, a Black Democrat running for Georgia governor, declined on Tuesday to directly comment on Republican David Perdue saying she should “go back to where she came from.”

“No, not at all,” Abrams, said at a news conference in Atlanta, when asked by ABC News whether she wanted to respond to what was widely labeled as racist remarks from Perdue on Monday night while giving a campaign speech in which he also charged she was “demeaning her own race.”

“I will say this,” Abrams told ABC News at Tuesday’s press conference. “I have listened to Republicans for the last six months attack me. But they’ve done nothing to attack the challenges facing Georgia. They’ve done nothing to articulate their plans for the future of Georgia. Their response to a comment on their record is to deflect and to pretend that they’ve done good for the people of Georgia.”

Perdue, running to get the GOP nomination for Georgia governor, seized on Abram’s comments last week that Georgia was “worst state in the country to live,” citing residents’ disparities in mental health and maternal mortality, among other issues.

“She ain’t from here. Let her go back to where she came from,” Perdue, a former senator challenging Gov. Brian Kemp for their party’s nomination, said at a campaign event in the Atlanta suburbs on Monday night. “She doesn’t like it here.”

A historic number of people have voted early in Georgia’s primary elections. According to the secretary of state’s office, approximately 857,401 people voted in-person or through an absentee ballot as of Friday — roughly three times as many as at the same point in the 2018 midterm election cycle.

Republicans are touting increased voter turnout as proof a controversial election law signed last year wasn’t as restrictive as its opponents described, while Democrats say the numbers are indicative of public pushback to the legislation.

Here’s what time polls close in each state on Tuesday. All times Eastern.

May 24, 5:07 pm
What races Republicans, Democrats will be watching closely in Tuesday’s primaries

Nowhere is that more apparent than in Georgia as Gov. Brian Kemp and Secretary of State Brad Raffensperger — two Republicans who balked at Trump’s requests to overturn the results of the 2020 presidential race — face challenges from enthusiastic proponents of Trump’s baseless election claims. Kemp is hoping to fight off former Sen. David Perdue, while Raffensperger is looking to rebuff Rep. Jody Hice.

Another high-profile contest in the Peach State will be the Senate primary, where football star Herschel Walker is running for the Republican nomination to likely challenge Democratic incumbent Raphael Warnock. Trump-endorsed Walker has been leading the pack despite several controversies, including prior accusations of domestic violence. (Walker has denied some of the allegations and said he doesn’t remember others.)

For Democrats, the most-watched race of the night will be a runoff in Texas’ 28th Congressional District as 29-year-old immigration attorney Jessica Cisneros tries for a third time to unseat nine-term incumbent Rep. Henry Cuellar. The heated primary is the first clear test of how abortion rights may motivate voters this election cycle, given Cuellar’s position as the sole anti-abortion Democrat in the House.

And in Georgia, two Democratic incumbents — Rep. Lucy McBath and Rep. Carolyn Bordeaux — are running against each other because of redistricting.

Dems stress message discipline on abortion ahead of midterms, while GOP hopes to avoid blunders