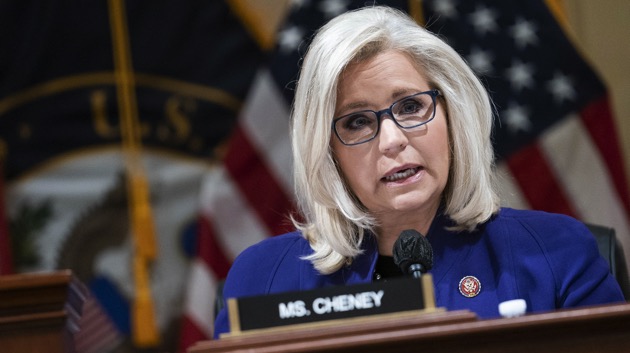 (WASHINGTON) — In its second formal rebuke of Wyoming Republican Liz Cheney, the state party passed a resolution this week to no longer recognize her as a member — but Cheney, up for reelection in 2022, appears unconcerned.

“It’s laughable to suggest Liz is anything but a committed conservative Republican,” said Jeremy Adler, Cheney’s spokesperson. “She is bound by her oath to the Constitution. Sadly, a portion of the Wyoming GOP leadership has abandoned that fundamental principle, and instead allowed themselves to be held hostage to the lies of a dangerous and irrational man.”

The resolution, which is symbolic and doesn’t strip Cheney from any tangible power, cleared the Wyoming GOP Central Committee on Saturday by a narrow vote of 31-29.

The Casper Star-Tribune reported on the document which paints Cheney as having “caused massive disruption, distraction and division within the House Republican Conference” and as having “proudly pledged allegiance to democrat Speaker of the House Pelosi, as a means of serving her own personal interests while ignoring the interests, needs and expectations of Wyoming Republicans.”

ABC News has reached out to the Wyoming GOP for comment.

It’s not the first time Cheney, who serves as vice-chair of the House select committee investigating the Jan. 6 attack on the Capitol, has been rebuked by her own party as the congresswoman continues to voice opposition to former President Donald Trump’s attempts to overturn the 2020 election.

The Wyoming Republican Party had already voted in February to formally censure Cheney after she became one of 10 House Republicans to vote to impeach Trump for “incitement of insurrection.” In May she was removed from her post as GOP conference chair, and her subsequent rank as the No. 3 Republican in the House stripped — backlash encouraged by Trump.

“I will not sit back and watch in silence while others lead our party down a path that abandons the rule of law, and joins the former president’s crusade to undermine our democracy,” Cheney said on the House floor on the eve of that ousting.

The daughter of former vice president Dick Cheney has branded herself a vocal defendant of the Constitution and opponent of Trump — representing a state that voted overwhelmingly for him. Seventy percent of Wyoming’s vote went to Trump in 2020.

But Cheney’s support in 2020 was also strong with 68.6% of the vote in the general election and an even stronger turnout in the Republican primary with 73.5% of the vote there.

Still, the midterms could prove to be a difficult cycle for the state’s sole member of the House of Representatives.

Trump has vowed to campaign against the Republicans who voted to impeach him with a particular ire reserved for Cheney. He has already endorsed Harriet Hageman, a lawyer who ran for Wyoming governor in 2018, who has questioned the legitimacy of the 2020 election, in next year’s primary race.

Responding to Trump’s endorsement in a tweet, Cheney said, “Here’s a sound bite for you: Bring it.”

While Cheney’s voting record paints her as a a credentialed Republican, siding with Trump on policy matters 93% of the time — up from the 78% of her successor in House leadership, Rep. Elise Stefanik, R-N.Y., — and she carries an “A” rating from the NRA and a 96% ranking from the conservative Heritage Foundation, her criticism to fellow Republicans for downplaying the events of Jan. 6 has made her a party outlier.

Despite Trump’s persistent attacks and her party’s isolation of her, Cheney is not backing down from the fight.

“Political leaders who sit silent in the face of these false and dangerous claims are aiding a former president who is at war with the rule of law and the Constitution,” Cheney said in an impassioned speech in New Hampshire last week. “I love my party and its history and its principles. But I love my country more. And I will do all I can to defend her.”

Cheney told ABC News This Week Co-Anchor Jonathan Karl in May she knew her vote to impeach Trump was not popular with many of her constituents but said she’s committed to making sure voters in her state understand her reasoning — and why it shouldn’t mean the end of her political career.

“The people of Wyoming fundamentally believe in the Constitution and faithfulness to it and our oath,” Cheney said. “If the choice is between somebody that Donald Trump decides he’s going to anoint and that person’s basis for being in this race is their loyalty to some person, to Donald Trump, every day of the week I will stack my record and my commitment to the Constitution and my commitment to people of Wyoming up against that.”

ABC’s This Week Co-Anchor Martha Raddatz traveled to Wyoming at the same time, where she spoke to many of Cheney’s constituents including Dennis Laughlin, a Harley-Davidson dealership owner in Green River, Wyoming, who said Cheney is falling in popularity following the impeachment vote.

“I think voting your conscience is noble. But not necessarily the best move that you can make for your political career,” Laughlin said. “The vast majority of people in the state of Wyoming are not happy with her decision.”

The Wyoming Republican primary is scheduled for next August.