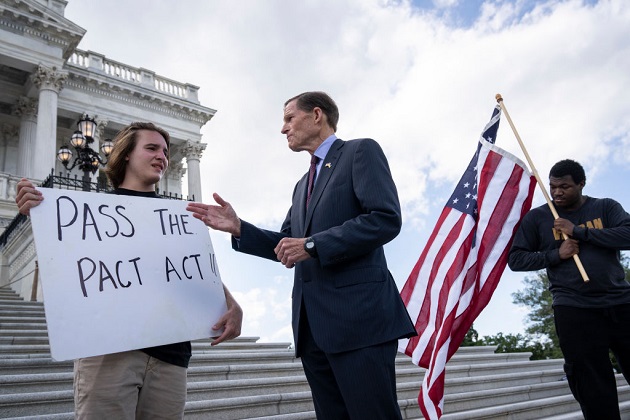 (WASHINGTON) — Senators are hopeful that within days they’ll again approve a bill that would offer millions of veterans expanded health care and disability payments for illnesses induced by exposure to burn pits during their service.

The proposal, known as the Honoring Our PACT Act, has been at the center of heated debate on Capitol Hill after Republicans, in a reversal, last week blocked the legislation following its bipartisan passage in June before a technical change in the House-passed version forced another Senate vote.

Twenty-six Republicans, led by Pennsylvania Sen. Pat Toomey changed their votes the second time around after the bill initially passed 84-14. It won only 55 votes last week, falling short of the 60 votes needed to overcome a filibuster.

In total, the legislation would institute some $280 billion in new spending, over a decade, for veterans’ health.

The dispute — which drew the ire of veterans and activists like comedian Jon Stewart, who derided Republicans’ change of heart as cowardly — is over what Toomey called a Democratic “budget gimmick”: how $400 billion in existing funds already being used for veterans is being accounted.

“My concern about this bill has nothing to do with the purpose of the bill,” Toomey said on the Senate floor ahead of the vote last week.

“What I’m trying to do is change a government accounting methodology that is designed to allow our Democratic colleagues to go on an unrelated $400 billion spending spree that has nothing to do with veterans and won’t be in the veterans space,” Toomey added Sunday on CNN.

Senate Majority Leader Chuck Schumer, D-N.Y., has said he will offer Toomey a vote on an amendment to the bill to address his concerns.

“We offered Toomey — he’s standing in the way — the ability to do an amendment at 60 votes, just like the bill is a 60-vote bill. He insisted, at least in conversations with some others, saying, ‘No, no, no. If you don’t put it in the bill’ — which will kill the bill — ‘I’m not going to be for it,"” Schumer said at a news conference last week.

He told NBC News on Monday that the legislation would “pass this week.”

“America’s heroes who fought in our wars outside sweating their assess off with oxygen, battling all kinds of ailments while these motherf—— sit in the air conditioning walled off from any of it,” Stewart said on Thursday, lambasting the GOP blockade. “They don’t have to hear it, they don’t have to see it. They don’t have to understand that these are human beings.”

Appearing on ABC’s “This Week” on Sunday, Stewart said the winding course of the bill, despite the bipartisan support, was baffling.

“This is so bananas. Nothing changed. So I don’t understand any of this,” he said.

On Monday afternoon, Stewart joined a small group of protesters, many of them veterans, in front of the Senate ahead of planned votes.

Sen. Richard Blumenthal, D-Conn., spoke with Stewart about the legislation along with Florida Republican Sen. Rick Scott. Blumenthal said he believed but wasn’t certain that the Senate could act on the proposal in about 48 hours.

Burn pits have been used in U.S. military installations outside the country to dispose of waste, and the smoke from those sites has been linked to various respiratory illnesses and even cancer in troops who were exposed.

Senate stumbles toward government shutdown with impasse over energy policy

McCarthy rolls out House GOP ‘Commitment to America’ ahead of midterms