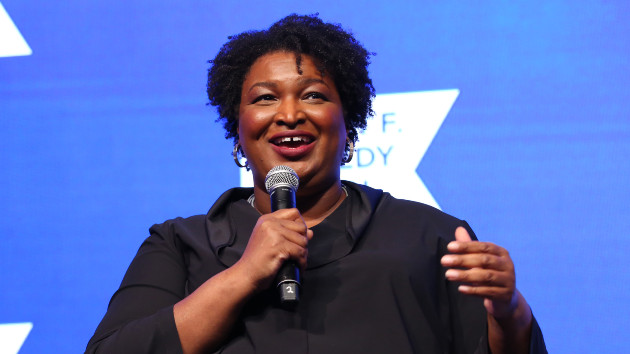 (ATLANTA) — Georgia gubernatorial candidate Stacey Abrams apologized Tuesday following the fallout from photos that captured her maskless at an elementary school outside of Atlanta.

“Protocols matter, and protecting our kids is the most important thing, and anything that can be perceived as undermining that is a mistake, and I apologize,” Abrams said on CNN.

Abrams wore a mask to the school, where she was promoting reading and Black History Month, and she took it off at the podium so that those in the audience could hear her, according to her campaign. She also took it off for photos with the children, all of whom were masked.

The photo of her sitting maskless among masked kids was circulated by Republicans — including her challenger incumbent GOP Gov. Brian Kemp — who used it to slam her perceived hypocrisy on COVID mitigation protocols including mask mandates.

“Stacey Abrams wants state government mask mandates for Georgians and their children,” Kemp said on Twitter, where he also reshared the photo, earlier this week. “But it looks like they wouldn’t apply when she’s attending a photo op.”

Former Sen. David Perdue, a Republican also running in Georgia’s gubernatorial race, took the opportunity to take a jab at Abrams, tweeting that “liberals’ thirst for power during this pandemic has caused enormous damage to our kids, while the elite like Stacey continue living their lives.”

Perdue also released a short ad attacking Abrams for going maskless and pushing for kids to be unmasked in schools.

The controversy started when, in a since-deleted tweet, the school’s principal, Dr. Holly Brookins, shared multiple photos of Abrams, including her sitting maskless and alongside masked children, and wrote that the school was “thrilled” to host the candidate. Abrams retweeted it and thanked her for the invitation.

On Tuesday, Abrams went on CNN and admitted going maskless was a mistake.

While she apologized, Abrams said the issue is complicated and should not be used as a political cudgel.

Abrams’ campaign manager Lauren Groh-Wargo tweeted the campaign’s response to her Republican opponents, saying that “it’s shameful that our opponents are using a Black History Month reading event for Georgia children as the impetus for false political attack…”

Groh-Wargo also followed up with a tweet saying that Abrams “trusts science and supports masking in schools as it’s the current CDC recommendation.”

The backlash against Abrams comes as the conversation surrounding masks in schools intensifies and several states loosen their mask requirements for students.

Biden reflects on MLK in sermon at his Atlanta church: ‘Progress is never easy, but it’s always possible’