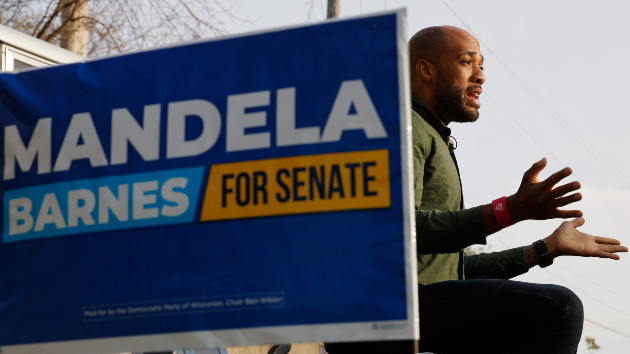 (WASHINGTON) — In Wisconsin’s high-profile Senate race, an army of mothers 500 strong is canvassing and door-knocking for the Democratic candidate, Lt. Gov. Mandela Barnes, in an effort to get out the vote on Election Day.

The group, dubbed “Moms for Mandela,” started independent of his campaign with the aim of mobilizing women to make their views clear on abortion access and gun reform.

“I was so frustrated seeing Ron Johnson celebrating the overturning of Roe and kind of refusing to do anything about the continued mass shootings that have been happening in this nation,” said Kate Duffy, a 35-year-old mother from a suburb of Milwaukee, referring to the Republican incumbent, Sen. Ron Johnson.

Many of the women, who Duffy says come from various backgrounds and areas across the state, haven’t been involved politically prior to this midterm election. They’ve held roundtables sharing personal abortion stories, spoken at rallies and cultivated a modest social media following to spread the word. Some even order their coffee with the name “Vote for Mandela” as an unconventional way of starting conversations about the race.

“Many women are coming forward and sharing their stories of abortion or other reproductive health scenarios that they’ve been involved with and kind of sharing why that’s going to matter with this election,” said Duffy.

Suburban women like Duffy and the group she’s amassed could make the difference in which candidate comes out on top.

“We have one of the most intense urban rural divides in the entire nation,” said Anthony Chergosky, a political science professor at the University of Wisconsin-La Crosse. “And that opens the way for suburban voters to decide close elections.”

Both Barnes and Johnson have focused on issues aimed to galvanize women. Johnson has hit Barnes hard on crime.

“He is a soft on crime champion whose policies make Wisconsin less safe,” said Ben Voelkel, an adviser to Johnson’s campaign, said in a statement.

At the same time, Barnes’ attacks on Johnson have focused on abortion access.

“The fact that [Johnson] was so callous as to say women who don’t like the laws of their state, like our 1849 criminal abortion ban, can just move did not sit well with a lot of people and it pushed them into action,” Barnes said in an interview with ABC News.

While abortion access and crime issues have animated the race, ultimately, the economy and inflation will likely be top of mind for voters as they head to the polls, including women who often make purchasing decisions in their households, giving them a front row seat to the rise in costs due to inflation. In Wisconsin and elsewhere, that could hurt Democrats.

It’s something Johnson’s campaign has seized on, attempting to tie Barnes to President Joe Biden, whose approval numbers remain dismal generally, including on his handling of the economy.

A recent Wall Street Journal poll found that white suburban women, who represent 20% of the electorate, favor Republicans for Congress by 15 percentage points.

Still, Duffy said she and her group of mothers are going to push to turn out voters for Barnes.

“I think we’re doing everything we can and I think that I hope that people can see past the messaging that they’re putting out there and know that Mandela Barnes and other Democrats are really going to help working class families of Wisconsin,” said Duffy.

Barnes has pointed to his own lived experience, saying that he can related to the economic struggles that everyday Wisconsinites are dealing with.

“He absolutely does not understand what people are going through,” Barnes said. “He doesn’t understand people’s economic concerns.”

Barnes believes economic messaging has been strong enough to get these voters to turn out for him.

Time will tell if Barnes’ efforts and that of the mothers organizing on his behalf will yield an election night victory. According to analysis from FiveThirtyEight, Johnson is favored in the race.