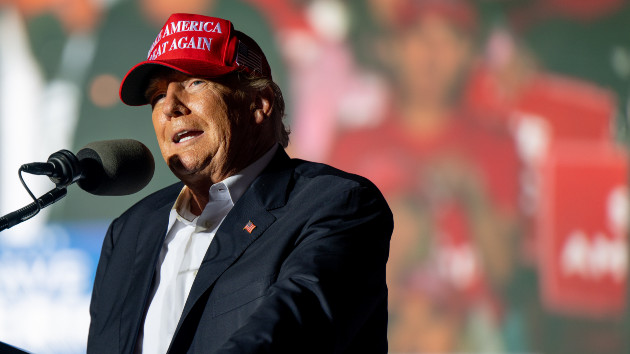 The ruling prevents the committee from accessing Trump’s tax returns as the court considers a final decision.

Trump asked the U.S. Supreme Court on Monday to block the House Ways and Means Committee from accessing his tax returns.

The committee has requested six years’ worth of Trump’s returns as part of an investigation into IRS audit practices of presidents and vice presidents.

In his petition to the Supreme Court, Trump accused the committee of seeking his taxes under false pretenses.

“The Committee’s purpose in requesting President Trump’s tax returns has nothing to do with funding or staffing issues at the IRS and everything to do with releasing the President’s tax information to the public,” the petition said.

A federal appeals court ruled in August that tax returns should be handed over to the House committee. The committee first sought the returns in 2019.

Trump most recently failed to block the request on Thursday when the D.C. Circuit Court of Appeals shot down his request to reconsider a unanimous opinion from one of its three-judge panels approving the committee’s access to the documents.

While Trump’s team claims the panel’s bid to obtain the tax returns is purely political, the committee insists the documents are valuable to assess how the Internal Revenue Service performs. presidential audits.

“The law has always been on our side,” House Ways and Means Committee Chairman Richard Neal, D-Mass., said in a statement after Thursday’s ruling. “Former President Trump has tried to delay the inevitable, but once again, the Court has affirmed the strength of our position. We’ve waited long enough—we must begin our oversight of the IRS’s mandatory presidential audit program as soon as possible.”

At the heart of the dispute is a federal tax law mandating that the Treasury Department “shall furnish” tax information requested by the Ways and Means Committee, a law Trump’s lawyers suggest is unconstitutional.

Democrats have been clamoring to get a glimpse of Trump’s tax returns since 2015 when he launched his bid for president and broke decades of precedent by not releasing the documents.

Besides having his personal tax returns sought after, Trump is also facing pressure by criminal probes into his personal business, possession of government documents after leaving office and efforts to block the certification of the 2020 election results.