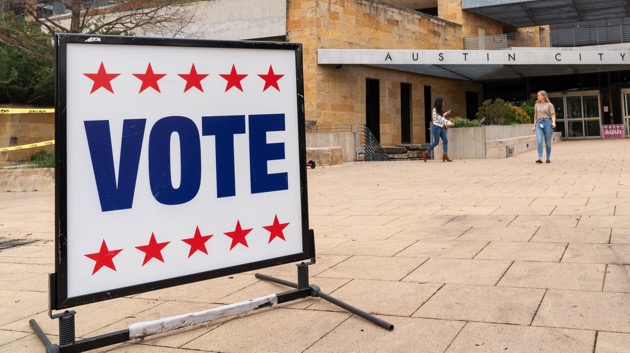 (AUSTIN, Texas) — As the first in-person voters of the 2022 election cycle head to the polls on Monday, not only is this year’s early voting period expected to set the political tone for candidates ahead of the March 1 primary election, it will also put a renewed spotlight on Senate Bill 1, the state’s recently revised election law.

The law officially went into effect in December following nearly a year of debates in the Texas legislature over its possible impact on voting rights. Some of the most contentious floor debates were rooted in state Democrats’ claims that the law would limit voters’ ballot access through complicated voter identification requirements. Democratic lawmakers and voting rights advocates also took aim at the expanded access poll watchers would have within polling places under the new law.

New regulations surrounding voter identification appeared to create immediate ripple effects in election administration as early as January. In some of the state’s biggest counties, like Harris and Tarrant counties, hundreds of Texans eligible to vote by mail initially saw their mail ballot applications rejected due to the heightened proof of identity requirements.

Some counties had trouble matching original voter registration records to the information provided by voters on their mail ballot applications and, in some cases, voters appeared to have their applications rejected because they failed to include all of the newly required information.

In the middle of January, Harris County — which includes Houston — reported up to 30% of its mail-in ballots being rejected or flagged for rejection. The county is obligated to tell voters if their ballot was rejected, giving them a chance to fix it, which is bringing the numbers down. Now, Harris County is reporting to ABC News it is seeing a 13.45% rejection rate due to the new law.

“Every time there’s changes in the law, whether it’s ID requirements, new requirements for mail-in ballots, it takes some time for voters to get used to,” Texas’ Assistant Secretary of State for Communications Sam Taylor told ABC News in January.

Critics of the new law are also bracing for another potential change with the start of early, in-person voting — the possible effects poll watchers could have on voters, especially voters of color.

According to the Texas Poll Watcher’s Guide, which is issued by the secretary of state’s office, a poll watcher is a person appointed to observe the conduct of an election on behalf of a candidate, a political party, or the proponents or opponents of a measure. Poll watchers must first successfully complete a training course administered by the state and are limited in where they can serve. Although there are some limitations to who can serve as a poll watcher, partisans associated with campaigns or political parties are not exempt.

Under SB 1, poll watchers are given broad access to observe activities within polling places, as well as any instances of curbside voting, and situations in which a voter could be getting help with casting their ballot. According to the Texas election code, watchers are also “entitled to sit or stand near enough to a member of a counting team who is announcing the votes to verify that the ballots are read correctly.”

SB 1 stipulates that watchers are supposed to observe the happenings inside a polling place “without obstructing the conduct of an election,” and an election administrator can call for a law enforcement official to remove a poll watcher if that watcher “commits a breach of the peace or a violation of law.”

But the presence of people within polling places whose roles do not involve assisting voters could cause confusion, or even dissuade first-time voters from casting their ballots, according to Cesar Espinoza, executive director of the immigrant-led civil rights organization Fiel Houston.

“Even if everything is done, right…we feel this is a waste of resources. This is a waste of people power. We should be all working to make more people want to go vote instead of trying to police those people who are already showing up to vote,” Espinoza added.

Jim Henson, director of the Texas Politics Project at the University of Texas at Austin, said empowering poll watchers through the new law could lead to a heightened partisan environment, putting voters of color on alert about interactions with poll watchers when voting in person.

“The push on empowering poll watchers, while increasing regulations around voting, have raised questions about voter intimidation, particularly from people of color, and in Texas – [voters] historically have an experience of voter intimidation during the period of Jim Crow – and… beyond that, during the period in which voting rights were not uniformly extended, particularly to African Americans, to Black voters and to Mexican American voters,” Henson said.

Although election administrators like Travis County Administrator Rebecca Guerreo tell ABC News they welcome trained poll watchers to be a part of the election process, despite concerns that some individuals “may be overzealous and overstep their authority,” voters could feel differently.