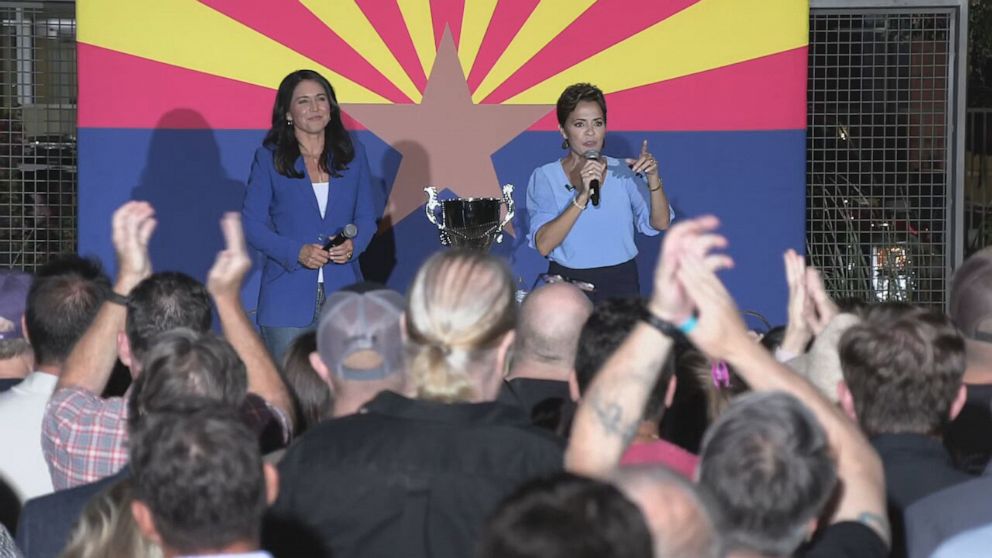 (CHANDLER, Ariz.) — Former Hawaii Rep. Tulsi Gabbard, who ran for president in 2020 as a Democrat and endorsed Joe Biden after her exit from the race, on Tuesday campaigned in Arizona for the state’s Republican gubernatorial nominee Kari Lake, a fervent election denier Trump loyalist.

The move follows her dramatic public departure from the Democratic party, denouncing it a week ago on social media as an “elitist cabal of warmongers driven by cowardly wokeness.” In Chandler, Arizona, Gabbard warned against those that “deny the existence of truth” before remarking with glowing support her endorsement of Lake, one of the most outspoken election deniers.

“I feel like a rockstar up here, Tulsi,” Lake said in front of at least 250 people. “You are a rockstar, Kari,” Gabbard responded.

At the campaign event, less than three weeks ahead of the midterm elections, Gabbard acknowledged that some have told her it was “odd” that she would be campaigning for Lake in Arizona as a former Democrat — but she dismissed those concerns.

“It’s only odd if you’re focused on the wrong things,” Gabbard said of her endorsement. “If you’re paying attention, you recognize that what we share in common, Kari and I and every one of you, is that pride, and it is the courage…It is clear eyes to recognize the threats to our safety, to our borders, to our communities, to our families and our kids that are coming from today’s so called woke radical Democrat Party.”

“Even Hitler thought he was doing what was best for Germany, right? For the German race. In his own mind, he found a way to justify the means to meet his end. So, when we have people with that mindset, well, you know we’ve got to do whatever it takes because, as President Biden said in that speech in Philadelphia, that those who supported Trump, those who didn’t vote for him are extremists and a threat to our democracy,” Gabbard said in an audio recording obtained by the Daily Beast.

Lake, who once donated to former President Barack Obama’s campaign, said on Tuesday that it was “no secret” that she was once a Democrat, too.

“I registered as a Democrat for four years. I was disappointed at the time at the establishment Republican Party,” Lake said. “I know it’s hard sometimes to kind of go, ‘gosh, darn it, we got it wrong. I voted for the wrong guy.’ But we don’t judge.”

Gabbard has not announced her next step in American politics, or if she’d consider jumping to the Republican Party. She’s long spoken out against the nationwide two-party system, however, leaving some to speculate that she may find a political home as an independent or in a third party.

But her recent campaign stops for Republicans and invocation of traditionally conservative talking points like “wokeness” and her focus on the border marks a sharp retreat from her support for Biden in 2020, when she suspended her unconventional presidential campaign.

“It’s clear that Democratic primary voters have chosen, Vice President Joe Biden, to be the person who will take on President Trump in the general election,” she said as she dropped out of the race, adding that, “I’m confident that he will lead our country, guided by the spirit of aloha respect and compassion, and thus help heal the divisiveness that has been tearing our country apart.”

Despite her status over the past 20 years as a Democrat, Gabbard over the past few years has become somewhat of a Republican darling, appearing often on Fox News and in August, she guest-hosted “Tucker Carlson Tonight,” following the FBI’s raid of Mar-a-Lago.

On Tuesday, Gabbard warned against those who deny truth only to reinforce their own beliefs, referring to the topic of children who identify as transgender, not the widely debunked claims of election fraud that have been a centerpiece of Lake’s campaign.

“We have to go back to the basics because the basics are under attack. When we have people in power who deny the existence of objective truth, that leads to a very dangerous place because that means that whatever they say is what they will enforce through their laws,” Gabbard said.