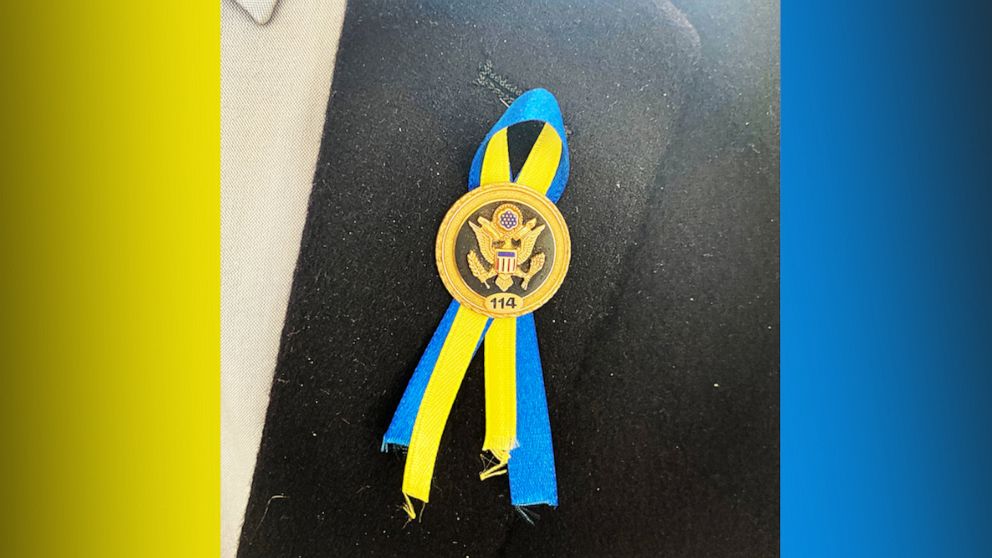 (WASHINGTON) — While President Joe Biden is laying out his agenda for the U.S., he and some members of Congress will be sending a message of support to Ukraine as it fights back invading Russian forces.

Several House and Senate members will be wearing a ribbon in the blue and yellow colors of the Ukrainian flag on their congressional pins during the speech.

House Speaker Nancy Pelosi will be wearing a pin with a combination of the Ukrainian and U.S. flag.

Some of those in Congress will demonstrate their support beyond their lapels.

Rep. Cheri Bustos, D-Ill., sported a blue suit and yellow blouse on Tuesday. She told reporters that more members will be wearing those colors during the president’s speech.

“We must do everything we can to preserve our democracies from those that wish to hurt them,” Bustos tweeted.

Earlier in the day, the White House tweeted a photo of Biden on the phone with Ukrainian President Volodymyr Zelenskyy as Biden wore a blue and yellow tie.

There will be at least one Ukrainian official on hand during the president’s remarks, according to the White House.

First lady Jill Biden invited Oksana Markarova, the U.S. ambassador to Ukraine, as a guest. She will be sitting in the viewing box with the first lady; the second gentleman, Douglas Emhoff; the president’s sister, Valerie Biden Owens; and eight other VIPs.

McCarthy struggles to clinch support to be House speaker, with hours to go before crucial vote