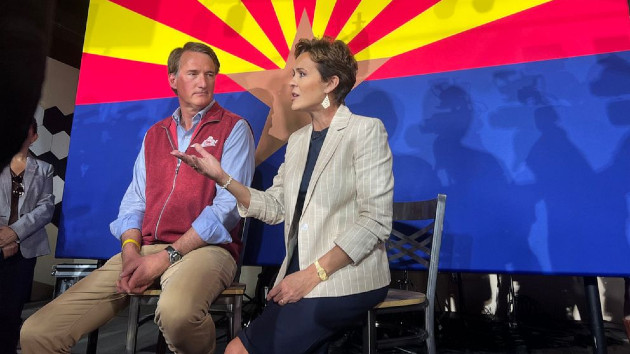 (TUCSON, Ariz.) — Virginia Gov. Glenn Youngkin made multiple campaign stops in Arizona on Wednesday with Republican gubernatorial nominee Kari Lake — the most MAGA-aligned candidate he’s traveled out of state for as he continues to raise his profile in the party.

Like other conservatives who’ve made the trek west for Lake, as she is locked in a tight race against Democrat Katie Hobbs, Youngkin spoke glowingly of her future.

“Kari, you are awesome,” he said to applause at one stop, after dancing out to the song “Spirit in the Sky.”

“I was flying here and thinking about all the ways Arizona is great — besides Kari Lake,” he said.

Youngkin compared Arizona’s political climate to his state, where he beat Democrat Terry McAuliffe last year and flipped the governor’s mansion in a notable victory for the GOP.

Arizona “is the spirit of Virginia, and we are linked across this great nation — yes over 2,000 miles apart — by our true belief in values, shared values — not Republican values, but American values,” he said.

Youngkin also defended his decision to stump for Lake, who baselessly denies the legitimacy of the 2020 presidential election, after outgoing Republican Rep. Liz Cheney said last month that his visit for Lake is “the kind of thing we cannot see in our party. We cannot see an accommodation like that.”

“One of the challenges that we’re seeing right now is that as a Republican Party, we’ve got to come together as opposed to apart,” Youngkin said on Wednesday. “And when we’re together, we win. And this is a chance for us to come together. Republicans don’t agree on everything. But I’m telling: You we agree on so much.”

During one stop, he and Lake captured the attention of around 200 supporters in a restaurant in Tucson, where some shouted for the two of them to run together for the White House in 2024.

But: “I have laser-beam focus on Arizona. I don’t love Washington,” she said. “I think that’s where most of our problems are coming from. I’m focused on Arizona, governor of Arizona, and solving our problems and being your worst nightmare in the big news for eight years. So get used to me.”

Noting that Youngkin can’t serve consecutive terms as governor, ABC News asked him if he is considering a presidential run as a next move.

“I will repeat something that Kari just said: that I am so flattered by this whole discussion,” he said. “I was sworn in on Jan. 15. And we’ve gotten to work in Virginia in order to deliver on what was an incredibly ambitious campaign plan and we’ve delivered on it — but we have a lot more to do. Our focus is to make sure that we’re delivering for Virginians, that we’re getting Republican congressional candidates elected in Virginia to take back our House and send Nancy Pelosi back to California.”

ABC News followed up with Lake, asking how she would feel if President Donald Trump, a major booster, asked her to join him on the ticket.

“I haven’t won yet — governor. I’m gonna win. I’m gonna win the governor’s race,” Lake said. “I didn’t even want to get into politics. … I’m using the gifts that God gave me to run for office, run for Arizona and help bring about change and that’s where I’m focused.”

Youngkin’s stop in Arizona is part of a broader campaign tour for the 2022 midterms.

He and Lake were also set to rally in Scottsdale on Wednesday evening after at least one private fundraising stop. The two are expected to focus on education policy, which helped propel Youngkin into office last year. School choice is a top campaign issue for Lake as well.

Youngkin recently traveled to the battlegrounds of Nevada, Michigan and Kansas.

When ABC News previously pressed Lake about Youngkin disagreeing with her on election integrity by affirming the 2020 race while she does not, Lake offered a similar response as the governor, essentially saying that there’s room in the GOP for election deniers.

“I mean, we’re all here together,” she said at a campaign stop last month, gesturing at supporters placed behind her for the cameras. “I think I agree with many of the people here on many of the issues, but we probably don’t agree on every single thing, right?”

“I don’t have to agree with him on everything, but I’m really happy that he’s coming,” she added then.

“I think what it’s showing,” Lake told ABC News on Monday, “is that the Republican Party is strong and solid and it is together.”