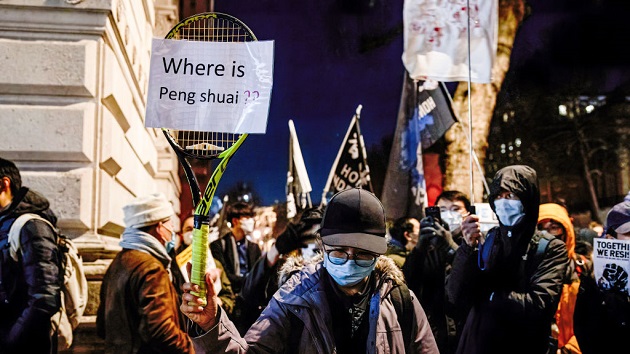 (MELBOURNE, Australia) — After immense international backlash, Tennis Australia has reversed course on its ban of spectators donning T-shirts in support of Chinese tennis star Peng Shuai at the Australian Open.

Peng, who was formerly ranked No. 1 globally in women’s doubles, has retreated from the public eye and social media after accusing a retired top Chinese Communist Party official of sexual assault last November. The saga has garnered international backlash over China’s handling of sexual assault claims, and attempts by Chinese state-run media to assuage international concern for Peng’s safety have only prompted further global skepticism about the case.

A Tennis Australia spokesperson confirmed the ban reversal to ABC News on Tuesday, saying the organization would take a “common sense approach” to enforcing its policy against political materials as long as there are no disruptions to the event. The apparent U-Turn came after videos on social media showed security and police confronting activists wearing T-shirts emblazoned with the words: “Where is Peng Shuai.”

Tiley confirmed to the Sydney Morning Herald that T-shirts supporting Peng will be permitted, but banners are still barred due to safety concerns.

“What we’ve said is that if anyone comes on site with an intent to disrupt and use the Australian Open as a platform for themselves and really disrupts the comfort and the safety of our fans, then they’re not welcome,” Tiley told the local newspaper. “However, if someone wants to wear a T-shirt and make a statement about Peng Shuai, that’s fine.”

Tiley continued: “But what’s not fine is if that someone brings in a big banner and it’s got big poles attached to it and it’s used as something [which is dangerous], it really takes away from the comfort and safety of the fans. We’ll stick to those terms and conditions.”

International tennis superstars including Serena Williams and Naomi Osaka have lent their voices to the growing chorus of concerns for Peng, with both athletes sharing posts about the saga on Twitter using the hashtag #whereispengshuai.

Peng re-emerged at a public event in the run-up to the Beijing 2022 Olympics in mid-December, and the International Olympic Committee released a photo last month of her participating in a video call with IOC head Thomas Bach. Correspondence purportedly from Peng that backtracks her sexual assault claim have also been published by Chinese state-run media outlets.

Despite the purported evidence that she is safe, the global Women’s Tennis Association announced last month that it was suspending all WTA tournaments in China, including in Hong Kong.

“Chinese officials have been provided the opportunity to cease this censorship, verifiably prove that Peng is free and able to speak without interference or intimidation, and investigate the allegation of sexual assault in a full, fair and transparent manner,” WTA Chairman and CEO Steve Simon said in a lengthy statement on Dec. 1 announcing the suspension. “Unfortunately, the leadership in China has not addressed this very serious issue in any credible way. While we now know where Peng is, I have serious doubts that she is free, safe and not subject to censorship, coercion and intimidation.”

Simon said the WTA has repeated its calls for a full and transparent investigation, without censorship, into Peng’s accusation. He also called on other international leaders to “speak out so justice can be done for Peng, and all women, no matter the financial ramifications.”