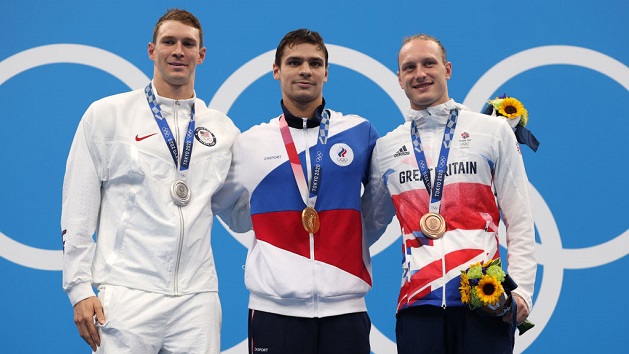 (TOKYO) — American backstroke swimmer Ryan Murphy alleged Friday that doping remains a problem in the sport after he lost twice to swimmers on the Russian Olympic Committee.

“It is a huge mental drain on me throughout the year to know that I’m swimming in a race that’s probably not clean,” said Murphy. “It frustrates me, but I have to swim the field that’s next to me.”

The defeat marked the first time since 1992 that an American hadn’t won in the men’s backstroke competition.

“To be clear, my intention is not to make any allegations here. Congratulations to Evgeny,” Murphy added. “I do believe there is doping in swimming.”

After the 2014 winter Olympic Games in Sochi, Russia, whistleblowers uncovered a massive state-sponsored doping program. In 2019, the World Anti-Doping Agency banned Russia from officially sending any athletes to an international sports competition until December 2022, but the International Olympic Committee made the controversial decision to allow some Russian athletes to compete in Tokyo under the moniker Russian Olympic Committee (ROC) after testing showed they were clean.

Rylov denied being a part of any doping schemes and said Friday that he had been tested and swam a clean race.

“From the bottom of my heart, I am for clean sport. I’ve devoted my entire life to this sport… Ryan didn’t accuse me of anything, so I’d rather not comment,” he said during a press conference on Friday.

FINA, the federation that oversees international swimming, defended its testing program in a statement to ABC News.

“FINA worked closely with the International Testing Agency (ITA) to ensure that its out-of-competition testing for Tokyo 2020 has been in line with that for Rio 2016, despite the restrictions caused by the pandemic,” it said in the statement. “And, of course, the aquatics athletes in Tokyo, including all medal winners, are regularly tested. However, as FINA has made clear to all our athletes, we are committed to doing more and further strengthening our anti-doping practices with more resources and greater transparency.”

As of Friday, the ROC team has won 34 combined medals, including 10 gold, the third highest of all competing nations. None of those medals will be recorded in Olympic records as Russian wins.

Key moments from Day 15 of the Olympic Games

Key moments from final day of the Olympic Games

Key moments from Day 14 of the Olympic Games