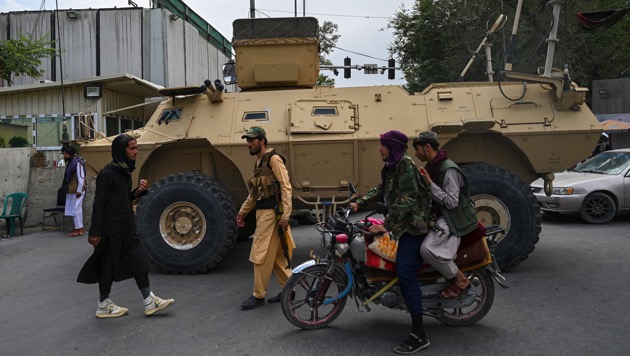 As the crisis intensifies, with images from Kabul showing Afghans storming the airport tarmac and climbing onto military planes after the U.S. assumed control of the airport, President Joe Biden briefly left Camp David to address the nation from the White House on Monday.

Biden is back in Washington on Wednesday and will sit down with ABC News’ George Stephanopoulos for an exclusive one-on-one interview at the White House, the president’s first interview since the withdrawal from Afghanistan.

The Pentagon said that 6,000 U.S. troops have been deployed to the country’s capital as the military races to evacuate people from an increasingly chaotic Kabul. Despite criticism, the Biden administration is sticking by its decision to withdraw troops from the country by Aug. 31, ending America’s longest war.

Thousands were still outside the airport in Kabul as the U.S. continues its evacuation efforts Wednesday and the Taliban patrolled the surrounding streets, only allowing foreigners through and occasionally firing warning shots, ABC News Senior Foreign Correspondent Ian Pannell reported.

The Taliban on Tuesday promised an “amnesty” for those who worked with the U.S. government and said it would allow for their safe passage to the airport, but on the ground on Wednesday, members of the Taliban were seen whipping Afghan civilians.

As many as 11,000 Americans and tens of thousands of Afghans still are desperately trying to leave the country. The U.S. said late Tuesday it had evacuated 3,200 people from Afghanistan including all U.S. Embassy personnel except for a core group of diplomats. Officials have said they plan to launch one flight per hour to hopefully evacuate up to 9,000 people each day.

Still, the situation remains tense across Afghanistan, with the international community paying close attention to the Taliban’s every move.

Outside of Kabul, about 90 miles away in the eastern city of Jalalabad, anti-Taliban protesters were met with violence from fighters after replacing the Taliban flag in the city’s main square with the Afghan national flag, The Associated Press reported.

Ghani and his family left Kabul on Sunday as the Taliban surged closer to the presidential palace. The Taliban ultimately overtook the building and has claimed the formation of the “Islamic Emirate of Afghanistan.”

Aug 18, 8:39 am
Few answers from Biden administration on Afghanistan despite pressure

Days removed from the Taliban’s takeover of Kabul and after a lengthy news conference with national security adviser Jake Sullivan, there is still little clarity on how conditions degraded so quickly in Afghanistan.

When ABC News Correspondent Stephanie Ramos asked Sullivan about reports that Biden administration officials were informed the Taliban could overwhelm the country, the national security adviser denied seeing it.

The administration plans to conduct an evaluation of the calamity once evacuations are completed.

“We’ll look at everything that happened, in this entire operation, from start to finish, and the areas of improvement where we can do better,” Sullivan told reporters Tuesday. “Where we can find holes or weaknesses and plug them as we go forward” that analysis will be shared.

Lawmakers are also putting pressure on the Biden administration for answers. Republicans on the House Armed Services Committee penned a letter to Biden demanding withdrawal plan details, plainly accusing the president of not having a concrete plan.

Aug 18, 7:52 am
Trauma injuries on the rise in Afghanistan, WHO warns

Months of violence in Afghanistan “have taken a heavy toll” on the country’s people and fragile health system, the World Health Organization warned Wednesday.

“As a result of the recent conflict, trauma injuries have increased, requiring scaled up emergency medical and surgical services,” Dr. Ahmed Al-Mandhari, the WHO’s regional director for the Eastern Mediterranean, said in a statement.

In July, some 13,897 conflict-related trauma cases were received at 70 WHO-supported health facilities in Afghanistan, compared with 4,057 cases during the same time last year, according to the WHO.

Attacks on health care infrastructure and staff also remain a major challenge. From January to July, 26 health facilities and 31 health care workers were affected, while 12 workers were killed, according to the WHO.

“Delays and disruptions to health care will increase the risk of disease outbreaks and prevent some of the most vulnerable groups from seeking life-saving health care,” Al-Mandhari said. “There is an immediate need to ensure continuity of health services across the country, with a focus on ensuring women have access to female health workers.”

“The people of Afghanistan need support and solidarity today more than ever,” he added. “The gains of the past 20 years cannot be turned back.”

Biden will sit down with ABC News’ George Stephanopoulos one-on-one on Wednesday at the White House for the president’s first interview since the withdrawal from Afghanistan.

The interview will air on ABC’s World News Tonight on Wednesday and Good Morning America on Thursday.

A high-level Taliban delegation has met with Afghanistan’s former president, Hamid Karzai, and the head of the High Council for National Reconciliation, Abdullah Abdullah, in Qatar’s capital and assured them of security, a Taliban source told ABC News on Wednesday.

The Taliban has said there is a general amnesty for all in Afghanistan, including former government officials, and that no one should flee the country.

The resettlement program will prioritize women, children and religious minorities.

“We have an enduring commitment to the Afghan people, and we will honour it,” British Prime Minister Boris Johnson wrote on Twitter. “A new resettlement scheme will create a safe and legal route for those in most need to come and live safely in the UK.”

While addressing members of parliament on Wednesday morning, Johnson said his government has so far secured the safe return of 306 U.K. nationals and 2,052 Afghan citizens as part of the resettlement program, with a further 2,000 applications for Afghan nationals completed “and many more being processed.” An additional 800 British troops will be deployed to Afghanistan’s main international airport in Kabul to “support this evacuation operation,” according to Johnson.

“We are proud to bring these brave Afghans to our shores — and we continue to appeal for more to come forwards,” he said.

Aug 17, 11:55 pm
US Embassy destroyed some Afghans’ passports during evacuation

Last week when the U.S. Embassy in Kabul ordered staff to destroy sensitive material, including documents, passports were destroyed as well.

During the evacuation, embassy personnel destroyed the passports of Afghans that had been submitted for visa processing, according to a Democratic lawmaker’s office.

Rep. Andy Kim, D-NJ, has been compiling requests for assistance for Afghans on the ground, with his office funneling pleas for help through an email address. In the email’s response note, obtained by ABC News, it says, “Passports that were in the Embassy’s possession have been destroyed. Currently, it is not possible to provide further visa services in Afghanistan.”

A State Department spokesperson acknowledged that was true, but called it “standard operating procedure” during an evacuation and said it “will not prevent people who are otherwise eligible for evacuation from traveling.

Republicans on the House Armed Services Committee sent a letter to Biden requesting information about his “plan” for Afghanistan.

“For months, we have been asking you for a plan on your withdrawal from Afghanistan. You failed to provide us with one and based on the horrific events currently unfolding in Afghanistan, we are confident that we never received your plan because you never had one,” the letter says.

“The security and humanitarian crisis now unfolding in Afghanistan could have been avoided if you had done any planning. Pretending this isn’t your problem will only make things worse. We remain gravely concerned the void left in Afghanistan will be rapidly filled by terror groups. The Taliban now control the country. Al Qaeda used Afghanistan to plot and execute the 9/11 attacks and other acts of terrorism,” the letter continues. “You cannot let this happen again.”

Notably, Rep. Liz Cheney, R-Wyo. — a member of the committee — has also signed the letter.

Cheney appeared on ABC’s This Week Sunday and said that Biden “absolutely” bears responsibility for the Taliban’s rapid takeover of Afghanistan, as does former President Donald Trump and his administration.

“What we’re watching right now in Afghanistan is what happens when America withdraws from the world,” Cheney told ABC This Week co-anchor Jonathan Karl. “So everybody who has been saying, ‘America needs to withdraw, America needs to retreat,’ we are getting a devastating, catastrophic real-time lesson in what that means.”