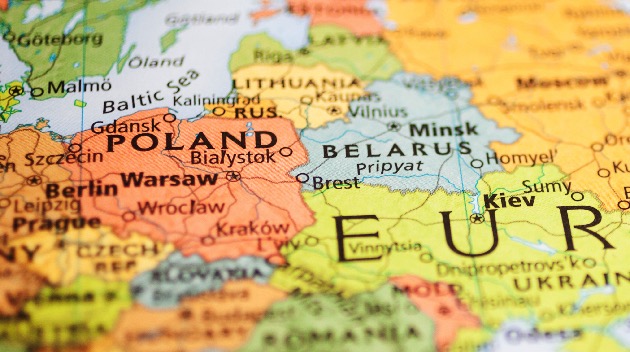 (BIALYSTOK, Poland) — In a dark, cold Polish wood, Ahmad Al Hasan’s coffin was lowered into a freshly dug grave. It was early evening but already pitch black in the cemetery outside the village of Bohoniki, a few miles from Poland’s eastern border.

The 19-year-old Syrian’s final resting place among the birch trees was thousands of miles from his homeland. His family wasn’t present, instead watching from a mobile phone held up by a local man. Those attending were a crowd of international media and two local women, who wept.

Al Hasan drowned this month as he tried to cross from Belarus into Poland, one of the thousands of people, mostly from the Middle East, caught up in the migration crisis orchestrated by Belarus’ authoritarian leader, Alexander Lukashenko, who’s accused of funneling migrants to European neighbors in an effort to retaliate against the European Union for supporting Belarus’ pro-democracy movement.

Since early autumn, the forests between Belarus and Poland have become the arena of what can at times resemble a nightmarish survival test: Thousands of people trying to cross find themselves trapped between Polish border guards stopping their entry and Belarusian security forces blocking their retreat. The result is people find themselves stranded in the forests, without food or shelter, often for weeks.

The crisis in recent weeks has become increasingly dangerous as temperatures have fallen to freezing. The official death toll from Polish authorities stands at 12, but human rights activists believe the number is higher.

After Belarus escalated the crisis two weeks ago, the largest group of migrants — estimated at more than 2,000 — was trapped in a makeshift camp pressed up against the border fence on the Belarusian side. Following violent clashes on Monday, which Belarusian security forces are accused of inciting, Belarus has now finally moved most of the migrants to a nearby warehouse. It did so after calls between Lukashenko and Germany’s leader, Angela Merkel, had raised some hopes the crisis may be easing.

But for now conditions remain grim, and there is little sign the migrants’ situation will be resolved rapidly. The Belarus government has said there are 7,000 migrants still in the country.

The warehouse housing the 2,000 migrants is now overflowing, according to people there. Videos from Belarusian media show hundreds sleeping on the floor among packing shelves. An Iraqi Kurdish woman, who identified herself as Dnya, said by phone Friday that there were not enough toilets and some people were still sleeping outside because the building was too crowded.

Iraq’s government on Thursday began voluntary repatriation flights from Minsk, flying home nearly 400 people. But many migrants have said they want to wait for Europe to take them and that they face death at home.

It’s unclear how many migrants remain in the forests, but activists say they fear it is hundreds. Poland’s authorities on Saturday again accused Belarus of helping hundreds of people to try to cross overnight.

Activists in the area fear each night there could be more deaths. Volunteer medics from the Polish Center for International Aid, or PCPM, who are now working in the area, on Wednesday night said a 1-year-old Syrian child had died in the forests. The child’s family had been in the woods for a month and a half, according to the medics.

Al Hasan, the 19-year-old whose funeral was held this week, had drowned after Belarusian border guards forced him to swim across a river, even after he pleaded he couldn’t swim, according to Kassam Shahada, a local doctor who helped organize the burial.

Members of the local Polish Tatar community, a Muslim minority, took it on themselves to give Al Hasan an Islamic funeral. Men from the community dug the grave and an imam conducted the ceremony.

The suffering in the forests has prompted a mobilization in Poland among refugee rights groups and local residents to help, despite opposition from Polish authorities.

Poland’s government has declared a state of emergency at the border and sealed off a 3-kilometer-wide zone along it, keeping media and humanitarian organizations out — a deliberate tactic that critics say is to conceal illegal pushbacks of asylum seekers.

But despite that, groups from across the country are still trying to help. Most nights, activists go into the forests trying to reach people, giving them warm clothes and food. Inside the security zone, they risk arrest and must wait until people make it outside it before they can get to them.

Medici na Granicy, a volunteer medical group that finished a month-long stint at the border this week, said it repeatedly found people who would have died without their intervention. Jakub Sieczko, a medic from the group, said they had found pregnant women, in one case conducting an ultrasound there on the forest floor.

“In the 21st Century, in a democratic country, that this is happening is simply unacceptable,” he said via a translator.

The group said it’s also faced harassment, with the air having been let out of their ambulance’s tires and, on the final night of their deployment, unknown attackers using axes to break their vehicle’s windows.

Activists have criticized Poland’s government for refusing to ask major international humanitarian organizations to assist. Instead the work is falling on tiny volunteer groups.

Sonja Orlewicz, a filmmaker from Warsaw, came with a group of friends for a week. Each night, the group was going into the woods with soup and clothes, taking on the role of rescue workers.

How climate change could hinder reforestation efforts, according to experts