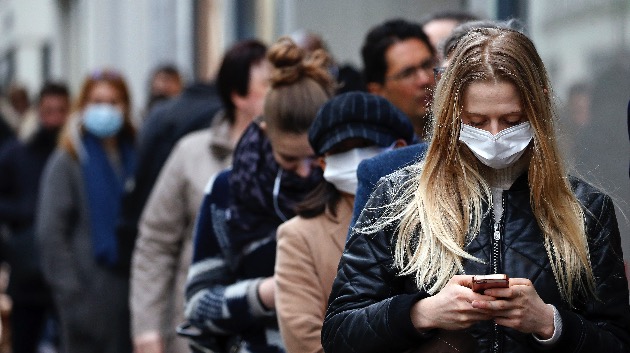 (LONDON) — France this week became the latest European country to tighten its coronavirus restrictions, with nations across the continent posting record numbers of COVID-19 infections in an omicron-fueled surge.

On Dec. 21, the WHO’s regional director for Europe, Dr Hans Kluge, warned that the omicron variant — believed by scientists to be far more transmissible than delta — was set to become the dominant variant on the continent following confirmation that it already had in Denmark, Portugal and the U.K.

Since then, the rate of infection has increased, with France, Italy, the U.K. and Spain posting historic record numbers of COVID infections in recent days. Infections, according to Kluge, are 40% higher than during the same period last year.

In France, where nearly 90% of the eligible population is fully vaccinated, from Jan. 3 there will be an obligation to work from home for three days a week and mask mandates in outdoor city centers. Several countries announced prior to Christmas that they would be introducing restrictions for after the holiday weekend.

In Germany, that means that nightclubs will have to close, large-scale events such as soccer games cannot occur with a live audience and the sale of fireworks is also banned and large-scale events for New Years’ Eve are prohibited.

The Netherlands, meanwhile, is already in an effective lockdown to combat COVID-19 infections, with schools, non-essential stores, bars and restaurants closed until Jan. 14. In the U.K., Wales, Northern Ireland and Scotland have reintroduced social distancing restrictions not seen since before the summer, while England has introduced health passports for mass gatherings and reintroduced mask mandates for public transport and outdoor settings.

However, England has been a notable outlier in that Boris Johnson’s government, encouraged by data that indicates the risk of hospitalization is lower from omicron than the delta variant, has not announced any new restrictions for the New Years’ period — despite the U.K. posting record numbers and more than 100,000 daily infections on several days last week.

Despite relatively high vaccination rates — around 68% of the European Union’s population has been fully vaccinated — there are concerns that not enough has been done to institute a booster drive across the continent which officials say is needed to drive up resistance against omicron.

For interstate European travel, the European Commission announced that their EU Digital COVID Certificate will only be valid for 9 months, meaning that boosters will be required for certificates to be renewed.

In several countries, life is set to become far more difficult for the unvaccinated. This month, Germany has placed major restrictions on access to public life for unvaccinated people — with only those who have been vaccinated or recently recovered allowed entry into non-essential stores, leisure facilities, bars and restaurants.

France meanwhile is set to change its COVID “health pass” into a “vaccine pass” from next month — now it is only valid with vaccination, rather than vaccination or proof of a negative test.

Several European officials have indicated that mandatory vaccinations are likely to become a fact of life in the future. Austria from February will institute a monthly fine on people who do not take up the offer of a vaccine. EU Commission President Ursula Von der Leyen has suggested vaccine mandates could be welcome, with concern that the estimated 150 million Europeans still unvaccinated are the group driving increases in hospitalizations.