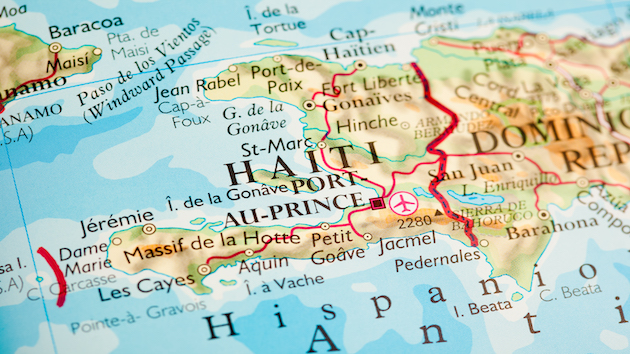 (NEW YORK) — Survivors of a previous kidnapping by the notorious Haitian gang 400 Mawozo have revealed details about what life was like as a hostage, with the group currently demanding a $17 million ransom to set free 16 Americans and one Canadian they have captive.

The group of missionaries affiliated with Christian Aid Ministries were kidnapped at a checkpoint in the capital of Port-au-Prince on Saturday, officials told ABC News, and the FBI, State Department and other U.S. agencies have sent a team to the country to secure their safe release. A senior Haitian police official involved in the efforts to free the Americans told ABC News that the kidnappers have demanded a ransom of $1 million per person.

Christian Aid Ministries, based in Ohio, revealed more details about the hostages on Tuesday, saying that the adults held captive were between the ages of 18 and 48, while there were also five children, the youngest of whom is 8 months old.

In Haiti, a majority Catholic country, 400 Mawozo gang members are known for their brutal tactics and targeting of clerical groups. Gédéon Jean, the director of Haiti’s Center for Analysis and Research in Human Rights, told the Washington Post that the gang was responsible for the most abductions.

Haiti has the highest kidnapping rate per capita in the world, and 400 Mawozo members are believed to have been responsible for kidnapping ten French missionaries in April of this year, who were released after 20 days. In interviews with ABC News, two survivors recounted their experience and offered their prayers for the current hostages.

Father Jean Millien, who was among the group of missionaries and is still based in Haiti, told ABC News that he was hopeful the hostages would be set free.

“The message I have for them is not to be impatient,” he said. “I do think that one day all of them will be free.”

And another of the survivors from the April kidnapping, Sister Agnes Bordeau, 81, of the Sisters of Providence, who has since returned to France, shared details with ABC News about what life is like under hostage conditions. They were kidnapped after being given repeated warnings from the French Embassy in Haiti about the dangers of operating in the country.

After they were kidnapped by the armed gunmen, Bordeau said that the group changed locations three times; their captors able to evade the authorities in a country that is roughly the same size as the state of Maryland.

“We were sleeping on cardboard outdoors in the middle of the forest,” Bordeau told ABC News. “Five days outdoors without moving. Of course, if we needed to go to the restrooms we had to ask permission and we were followed by an armed guard. [When we were moved inside] we were afraid for our lives as the room was very dirty and it was very hot. Only one person could stand or sit.”

In the forest they experienced perhaps the most terrifying event of their ordeal — when they suspected their captors were digging makeshift graves.

“At some point, I could hear noises of people digging and I asked a priest what it was about and he told me very peacefully that the ang was preparing for us a pauper’s grave,” she said. “They tied our hands, one of the gang members [ripped] a priest’s robe to make strips to blindfold us altogether, but it did not last for a very long time.”

Despite the harrowing ordeal, during which they were only fed one meal a day, Bordeau said, the missionaries eventually engaged in dialogue with their captors, even though all of their possessions — with the exception of their personal bibles, were stolen.

They survived, she said, through their collective faith.

“We supported each other, we took care of each other, we paid attention to our own words as well,” she said. “We were never discouraged and we had very deep moments of prayers… And personally I can say I could really feel the presence of God in the middle of us.”

After 20 days of captivity, Bordeau said they were abruptly released in the middle of the night. It is unknown whether or not a ransom was paid.

“When we were released, the big chief of the gang asked us to pray for them,” she said.

Secretary of State Antony Blinken has vowed that the U.S. will do all it can to secure the release of the hostages.

“Gangs dominate many parts of Port-au-Prince and other parts of Haiti, the national police can’t even operate in many of these areas,” Blinken said, noting the practical difficulties of life on the ground.