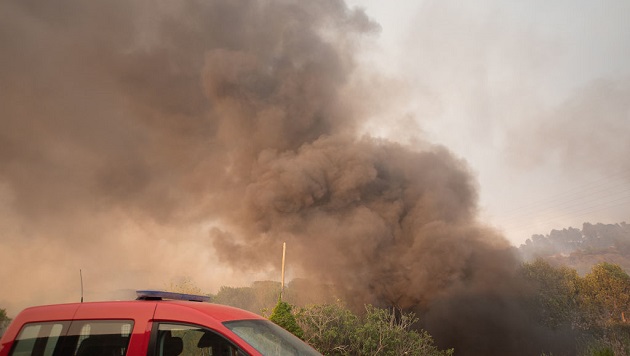 (LONDON) — As Western Europe experiences a record-breaking heat wave, thousands of firefighters are having trouble containing forest fires in France, Spain and Portugal that have destroyed thousands of acres of land.

The fires have forced thousands of people to evacuate to safety, as extreme heat grips the region. There have also been more than 1,000 heat-related deaths in Spain and Portugal so far in July, according to the respective countries’ ministries of health.

In southern France, more than 14,000 people were forced to flee as fires spread to more than 27,180 acres of land. The country’s Interior Ministry also issued red alerts for heat waves for 15 French departments and orange alerts for 51 departments on Sunday.

Monday could be the hottest day on record in the country, according to France’s BFM TV. Belis, France, reached a high of 40.8 degrees Celsius — 105.44 Fahrenheit — on Sunday.

The number of people who died of heat-related deaths is unknown, but France’s Ministry of Health told ABC News that information on the number of casualties will be released at the end of the month.

Meanwhile, more than 360 people in Spain have died from heat-related deaths between July 10 and 17, with 84 people dying in the last 24 hours, the country’s Ministry of Health reported.

Temperatures on Sunday were forecast to reach 42 C (107.6 F) in three provinces in the country, prompting the state meteorological agency to issue “extreme risk” alerts.

In Mijas, Spain, in the municipality of Malaga, 3,000 people have fled due to fires. More than 22,000 acres of land are at risk of being burned in the Mijas province as firefighters struggle to contain the flames.

Wildfires are happening earlier in the season, ending later and becoming more frequent because of climate change, the European Union said in a report last year.

“Climate change is aggravating the situation, making countries more prone to wildfires and increasing the intensity of such events,” the report said.

In Portugal, wildfires are quickly spreading throughout the country’s central and northern regions. According to Portugal’s Ministry of Health, between July 7 and 13, 238 people had heat-related deaths, and there were more than 421 heat-related fatalities between July 14 and 17.

The sweltering heat is also expected to take hold of other parts of Europe in the coming days. Areas of England are expected to hit 40 C (104 F) on Monday and Tuesday.

The U.K. government issued a national emergency and warned people not to leave their homes unless necessary, according to The Associated Press.

Where wildfires are raging across Europe