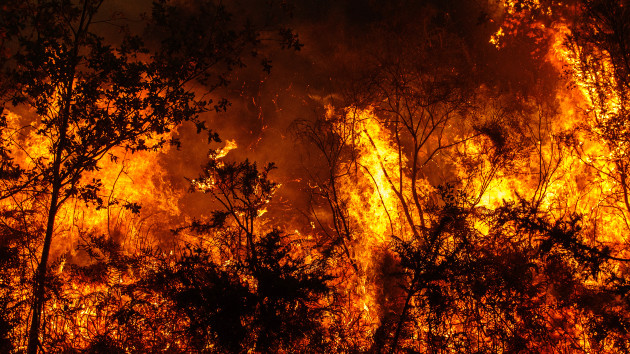 (NEW YORK) — The world will soon experience a steep increase in the number of devastating wildfires as a result of human activity, according to new research released by the United Nations Environment Programme.

Climate change and land-use change are projected to make wildfires more frequent and intense, with extreme fires expected to rise 14% globally by 2030, 30% by the end of 2050 and 50% by 2100, according to the report released Wednesday.

“Wildfires and climate change are mutually exacerbating,” the report states.

Wildfires are made worst by climate change through increased drought, higher temperatures and low relative humidity, while climate change is made worse by wildfires after they ravage “sensitive and carbon-rich” ecosystems such as rainforests.

“This turns landscapes into tinderboxes, making it harder to halt rising temperatures,” the authors wrote.

Extreme wildfire risk will become so widespread that even the Arctic and other regions previously unaffected by wildfires could be in peril of burning, according to the report. In addition, wildlife and their natural habitats will not be spared, pushing many species closer to extinction.

For instance, billions of domesticated and wild animals, including a large portion of the koala population, were estimated to have been wiped out during the bushfires that began in Australia at the end of 2019.

The increase of wildfires will also have social consequences on communities, as the world’s poorest nations will be disproportionately affected, according to the U.N. People’s health will be directly affected by the inhalation of wildfire smoke, and the costs of rebuilding areas struck by wildfires can be beyond the means of low-income countries.

The pollutants from frequent wildfires can also lead to soil erosion, causing more problems for waterways, and leave highly contaminated waste behind, the report states.

Governments are not prepared for the disastrous consequences these infernos will leave in their wake, the authors wrote.

The report calls for a radical change in government spending on wildfires, shifting their investments from reaction and response to prevention and preparedness.

“Because fires are so interdisciplinary and across so many different sectors and impact society, culture and climate and the vegetation, it’s essential that fire [management] actually be pushed within an agenda,” Glynis Humphrey, a fire ecologist at the University of Capetown and one of the authors of the report, told reporters at a press conference Monday.

Governments should adopt a new “Fire Ready Formula,” dedicating two-thirds of spending for planning, prevention, preparedness and recovery, with one-third left for response, the authors wrote.

The report also calls for stronger international standards for the safety and health of firefighters to minimize the risks they face before, during and after operations.