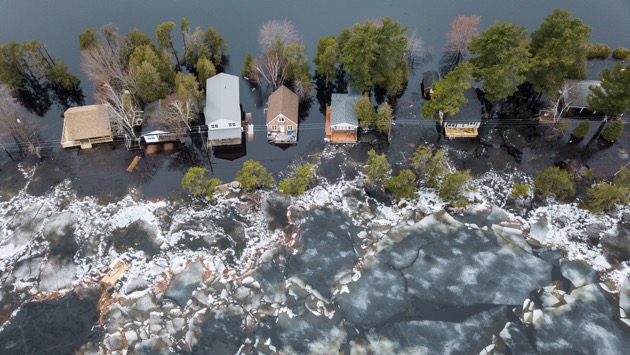 (NEW YORK) — As the world follows news about the Russian invasion of Ukraine this week, a group of international scientists are warning that the world can’t lose sight of another major threat: climate change.

A new report from the United Nations’ Intergovernmental Panel on Climate Change warns that climate change is impacting nearly every aspect of life on Earth and that there is no time to waste to prevent that damage from getting worse.

“Today’s IPCC report is an atlas of human suffering and a damning indictment of failed climate leadership. With fact upon fact, this report reveals how people and the planet are getting clobbered by climate change,” U.N. Secretary-General Antonio Guterres said in remarks during a press conference Monday morning.

Hoesung Lee, the chair of the U.N. panel that put together the report, called climate change a “grave and mounting threat to our well-being and a healthy planet.”

“This report is a dire warning about the consequences of inaction,” he said in a statement.

The report released Monday is part of a series of reports from the IPCC, a group of experts from all over the world that compile the best possible climate science to advise governments on decisions such as the Paris Agreement.

All parties to the Paris Agreement are scheduled to meet in Egypt in November to discuss how they will meet goals to dramatically reduce greenhouse gas emissions and how to fulfill commitments to provide financial support for countries already experiencing devastating impacts of climate change.

“This report really contains information that is a little bit like the parent yelling up the stairs, ‘You’re going to miss the bus.’ So, this report is really telling us just how urgent it is,” Sarah Cooley, director of climate science at Ocean Conservancy and coordinating lead author of the report’s chapter on oceans, told ABC News.

“But it’s also full of information about how many good options we have available right now that are already being attempted but need to be institutionalized and broadened so that we can make the most of the opportunities that remain in front of us, rather than continuing to hit snooze on climate and really leaving options out of the mix in the future.”

The UN panel warns of climate change’s severe and worsening effects on human health and safety as well as damage to plants and animals that is pushing ecosystems beyond their natural ability to recover.

The report warns that the world has a more than 50% chance of exceeding 1.5°C of additional warming, which is the benchmark set under the Paris Agreement to prevent worsening impacts of climate change.

Any additional warming beyond that level, the report warns, will increase the risk of severe and potentially irreversible impacts on humans and our natural environment.

“Depending on the magnitude and duration of overshoot, some impacts will cause release of additional greenhouse gasses, and some will be irreversible, even if global warming is reduced,” the report says.

As warming increases beyond 1.5°C, the report says the impacts will limit water availability, strain food production systems and increase health problems and premature deaths from exposure to heat waves or diseases such as dengue fever.

The report also highlights the mental health impacts of climate change for the first time, saying that climate change is placing a toll on people’s mental health through the stress of being evacuated during events such as wildfires or natural disasters but also the indirect stress and anxiety associated with being exposed to lots of images and information about climate change.

Average global temperatures have already increased an average of 1.1°C compared to pre-industrial times — and more in some areas. The report highlights that some parts of the world are more vulnerable than others, saying 3.3 to 3.6 billion people live in areas considered “highly vulnerable” to climate change.

A closing window to adapt

While the report warns about the urgent risks of allowing warming to continue, it also discusses the parallel track of how to adapt to the impacts of climate change that are already here and quickly becoming more severe.

In some cases, the limits of adaptation have been reached and there is no known solution, such as coral reefs that are unable to recover from warming ocean temperatures.

But limits to human adaptation are less tangible, and, in many cases, the report found they can be overcome through financial assistance or government intervention.

“I would say the majority of the situations that we see around the world where we do know that there are solutions that would work. We just haven’t tried to implement them yet,” Rebecca Carter, acting director of the climate resilience program at the World Resources Institute, told ABC News.

Carter said the report focuses on how solutions that restore natural ecosystems can be a more effective way to adapt to climate change than engineered solutions such as building sea walls, though in some places those may still be necessary.

The report’s authors said the world can still limit some of the impacts of climate change from becoming more dangerous if countries dramatically reduce greenhouse gas emissions and governments take steps such as protecting vast swaths of natural areas on land and in the oceans.

“The scientific evidence is unequivocal: Climate change is a threat to human well-being and the health of the planet,”IPCC Working Group II Co-Chair Hans-Otto Pörtner said in a statement.

“Any further delay in concerted global action will miss a brief and rapidly closing window to secure a livable future,” he said.