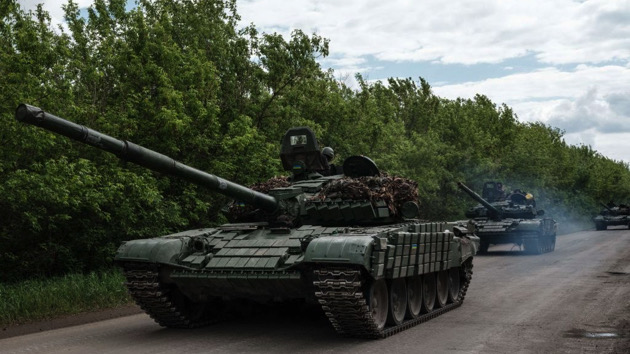 The Russian military has since launched a full-scale ground offensive in eastern Ukraine’s disputed Donbas region, attempting to capture the strategic port city of Mariupol to secure a coastal corridor to the Moscow-annexed Crimean Peninsula.

A video released Sunday by a pro-Russian separatist commander showed a shower of bright-burning munitions cascading down on the Azovstal steel plant in the Ukrainian port city of Mariupol, where a few hundred Ukrainian fighters remain holed up weeks after the city fell into the hands of Russian forces.

The video shows projectiles bursting into showers of burning matter which then explode on contact with the ground or buildings.

The footage was posted on Telegram by Alexander Khodakovsky, a commander of the pro-Russian self-proclaimed Republic of Donetsk.

“If you didn’t know what it is and for what purpose — you could say that it’s even beautiful,” Khodakovsky said in a message that accompanied the video.

It was not immediately clear what type of munitions were seen in the video.

Ukrainian military officials said there was no letup on Sunday in Russia’s bombardment of the steel works plant.

Sweden’s ruling Social Democratic party announced Sunday that its board has decided to support the historically neutral country’s bid to join NATO.

The party said it will now work to advance Sweden’s application for membership to NATO.

If the application is approved by NATO, the Social Democratic Party said it will express unilateral reservations against the deployment of nuclear weapons and permanent bases on Swedish territory.

“We Social Democrats believe that the best for Sweden’s and the Swedish people’s security is that we join NATO,” Swedish Prime Minister Magdalena Andersson said at a news conference Sunday. “This is a decision that was taken after careful deliberations. A position in favor of NATO means that we are prepared to abandon a security policy that Sweden has had in different forms over 200 years.”

Andersson added, “For us Social Democrats it is clear that the military non-alignment has served Sweden well, but our conclusion is that it won’t serve us as well in the future.”

Leaders of Finland, another historically neutral Nordic country, also announced on Sunday that it will also apply for NATO membership.