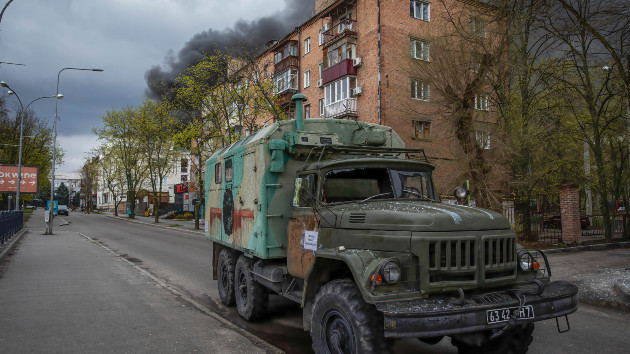 Russian forces have since retreated from northern Ukraine, leaving behind a trail of death and destruction. The United States and many European countries accused Russia of committing war crimes after graphic images emerged of dead civilians in the town of Bucha, near Kyiv. The Russian military has now launched a full-scale ground offensive in eastern Ukraine’s disputed Donbas region, as it attempts to capture the strategic port city of Mariupol and secure a coastal corridor to the Moscow-annexed Crimean Peninsula.

Russia’s military issued another ultimatum on Wednesday, calling for Ukrainian forces to lay down their arms and leave a Mariupol steel plant, according to Russian state media.

Moscow claimed that Ukrainian troops and civilians would be allowed to leave the Azovstal Iron and Steel Works plant without harm during a cease-fire beginning at 2 p.m. local time.

Ukrainian forces at the besieged plant rejected a similar offer on Tuesday.

More than 1,000 civilians are sheltering on the grounds of the sprawling industrial plant, the Mariupol City Council said on Monday.

A Russian official, Dmitry Polyansky, on Tuesday accused Ukrainian troops of using civilians at the plant as human shields.

“One month into the siege of Azovstal plant, those same radicals and neo-Nazis suddenly declared that allegedly there had been civilians inside the plant all that time, even though until yesterday, they had never uttered a word about it,” Polyansky told the U.N. Security Council during a session on Ukraine on Tuesday.

Apr 19, 11:40 pm
Russia could be making probing attacks ahead of larger assault in Donbas: US official

As Ukrainian forces brace for a full-scale assault in the eastern part of the country, a U.S. official said the increased pace of operations from Russian forces in the past 24 hours could be probing attacks or the beginning of the main battle for the Donbas.

But the U.S. defense official said Ukraine has the advantage in the region since they have prepared a defense for years, including digging trenches, preparing anti-armor traps and ambush locations and more.

The U.S. and other countries have now provided close to 70,000 anti-tank weapons to Ukraine as well as 30,000 anti-aircraft missiles and 7,000 launchers to fire them, according to the defense official.

As for stopping the shipments of those weapons, the U.S. believes Russia will target the paths and roads in western Ukraine being used to ship Western military aid into Ukraine even though it has not done so yet. Still, it’s believed with the amount of weaponry being delivered to Ukrainian forces, it will be impossible to stop it all.