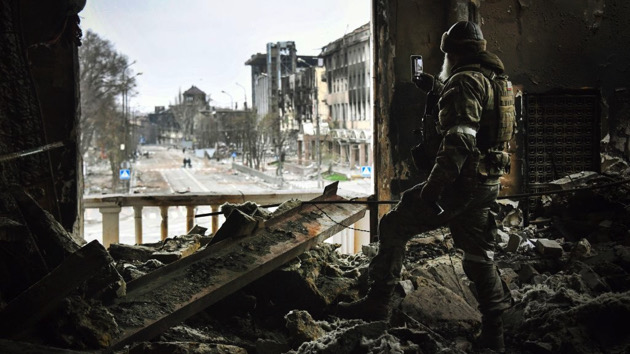 (NEW YORK) — Russian President Vladimir Putin’s “special military operation” into neighboring Ukraine began on Feb. 24, with Russian troops invading from Belarus, to the north, and Russia, to the east. Russian forces have since been met with “stiff resistance” from Ukrainians, according to U.S. officials.

In recent days, Russian forces have retreated from northern Ukraine, leaving behind a trail of death and destruction. After graphic images emerged of civilians lying dead in the streets of Bucha, a town northwest of Kyiv, the United States and European countries accused Russia of committing war crimes.

Serhiy Volyna, commander of Ukraine’s 36th Marine Brigade, which is engaged in a brutal fight to defend Mariupol against invading Russian forces, has issued an urgent plea for military reinforcements or a political solution — anything to break Russia’s siege of the Ukrainian port city.

In an interview Friday with Ukrainian online newspaper Ukrayinska Pravda, the commander said the situation is critical and the fighting is fierce.

“It can be done and it must be done as soon as possible,” Volyna added.

Despite Russia’s relentless bombardment for more than a month, the 36th Marine Brigade along with units of the Azov Regiment, a far-right group now part of the Ukrainian military, have held down Mariupol. They have refused to surrender, vowing to fight until the end.

During his latest daily address, Ukrainian President Volodymyr Zelenskyy observed that Ukraine has withstood 50 days of the Russian invasion.

“During the 50 days of this war, Ukraine became a hero for the whole free world,” he said.

Zelenskyy said he was grateful to those who have supported the country, though said that during the last 50 days he’s started to view world leaders in a different light.

“I have seen politicians behaving as if they had no power, and I have seen non-politicians who did more in these 50 days than some statesmen who claimed leadership,” he said.

Zelenskyy praised how Ukraine has defended itself, including those “who have shown that Russian ships can go … to the bottom only” — a nod to the sinking of the Russian Black Sea Fleet flagship vessel, Moskva.

Ukrainian government officials had claimed on Wednesday its armed forces fired missiles that damaged the vessel.

The U.S. Department of State’s s ongoing review of atrocities in Ukraine could conclude with a determination that genocide has been committed by Russian forces, spokesperson Ned Price said Thursday.

Price told reporters during a briefing Thursday that there was some “misimpression” about the process, but that the department’s effort to document, compile and analyze evidence of atrocities, which determined last month that Russian forces were committing war crimes, could include a determination on genocide.

Price reiterated that the U.S. is working with the Ukrainian prosecutor-general, whose office has clear jurisdiction for potential war crimes trials.

The U.S. has been providing the Ukrainian prosecutor-general’s office with the evidence it has collected, though it has not yet provided that information to the International Criminal Court, of which it’s not a member.

Meanwhile, the International Criminal Court’s chief, Karim A.A. Khan, currently is in Ukraine surveying scenes of atrocities in the Kyiv suburbs of Bucha and Borodyanka.

Apr 14, 5:12 pm
France moving its Ukraine embassy back to Kyiv

France is planning to move its embassy back to Kyiv “very soon” after relocating it more than 500 miles away in Lviv in western Ukraine when hostilities began to heat up around the capital city in March, the French foreign minister said.

French Foreign Minister Jean-Yves Le Drian made the announcement in a phone call Thursday with his Ukrainian counterpart, Dmytro Kuleba.

“This redeployment will take place very soon and will make it possible to further deepen the support provided by France to Ukraine in all areas to deal with the war launched by Russia on February 24,” Le Drian said in a statement.

U.S. State Department spokesperson Ned Price was asked at a briefing if the United States was considering a similar move now that the bulk of the fighting has shifted in Ukraine from the south of the country to the east. The U.S. embassy in Ukraine was also moved from Kyiv to Lviv following the start of the Russian invasion, but embassy staff has been working from Poland in recent days, Price said.

Price told reporters that the State Department is “always reviewing” the possibility of moving the embassy back to Kyiv, but the embassy team remains in Poland and is not crossing the border into Lviv as they had been.

“Obviously, our goal is to have a functioning diplomatic presence in Ukraine as soon as it is safe and practical for us to do so,” Price said.