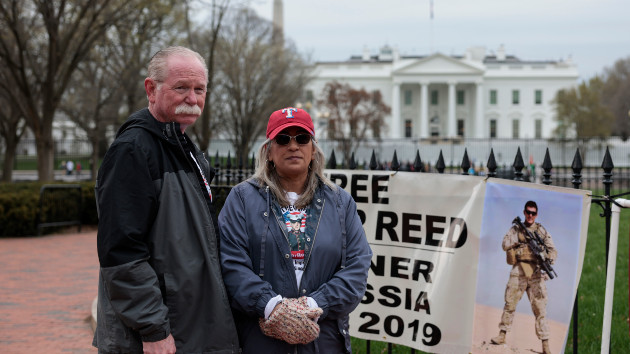 (NEW YORK) — It’s been three years since Joey and Paula Reed have seen their son Trevor, a former Marine currently held in a Russian prison, and now they’re afraid the ongoing conflict with Ukraine means their chances for his return are dwindling.

The couple spoke with ABC News’ “Start Here” Tuesday and discussed the latest developments in their fight to bring their son home.

Joey Reed said the situation is going “downhill” as communications with their son have diminished since the start of the Russian invasion and on Monday he was reportedly sent to a prison hospital. He said he fears that Russian officials may take more action against his son and other Americans currently held in their prisons and is urging President Joe Biden to act.

“Our biggest fear right now is him getting home at all. We’re concerned that they’re going to put additional charges, false charges on him, which that’s typical FSB and or he will die,” Joey Reed told ABC News.

Trevor Reed’s detention began in 2019 when his family says he was visiting a girlfriend in Moscow. The 30-year-old was arrested after Russian authorities said he allegedly assaulted a police officer while drunk.

When asked by Reed’s attorneys for video from inside the car, Russian authorities did not present any evidence that he grabbed the wheel or assaulted the officers. But a year later Reed was sentenced to nine years in a Russian penal colony.

Paula Reed said her family tried to raise awareness for their son’s imprisonment, but they struggled to get any headway due to other topics taking up the headlines, including the start of the pandemic.

“It just seemed like Trevor couldn’t get a break because every time we thought we were going to get some news out there, something bigger was happening in the world that got the attention. So it took us a long time to get our feet running on getting publicity,” she told ABC News.

The Reeds have also been calling for the release of Paul Whelan, another ex-Marine who has been imprisoned in Russia since 2020 following a conviction. The family has picked up their calls for help, and last week protested outside the White House and asked to meet with the president.

“We just thought that they would see us and it would remind someone that they need to be together for a meeting,” Joey Reed said.

Biden met with the family after their protest.

The Reeds said during their meeting, which lasted over half an hour, they reiterated their calls to Biden for a prisoner exchange.

“We think that that’s the only way Trevor is going to get back with us any time soon,” Paula Reed said.

She added that her son is losing hope of ever returning home and picking up up his life where it left off.

“The longer he’s in prison, the harder that’s going to be for him to do,” she said.

White House press secretary Jen Psaki said in a statement that, “during their meeting, the president reiterated his commitment to continue to work to secure the release of Trevor, Paul Whelan, and other Americans wrongfully held in Russia and elsewhere, and to provide all possible assistance until they and others are free and returned home to their families who are advocating so passionately for their release.”

The White House declined to comment about specific details discussed between Biden and Reed’s parents.

The Reeds said they felt the president was mindful of their requests.

“He’s a good man. He had a son in the military. He’s lost children and he’s compassionate,” Joey Reed said. “We believe that after hearing us out that I can’t imagine that he’s not doing something to speed up the process for bringing our son home.”

In the meantime, the Reeds said that the government needs to do more to defend and bring back Americans wrongfully imprisoned abroad.

“We just want to get him out of there alive and the sooner, the better,” Joey Reed said.

Why it may be hard to isolate Russia and has it become a pariah state?

Why it may be hard to isolate Russia, experts say