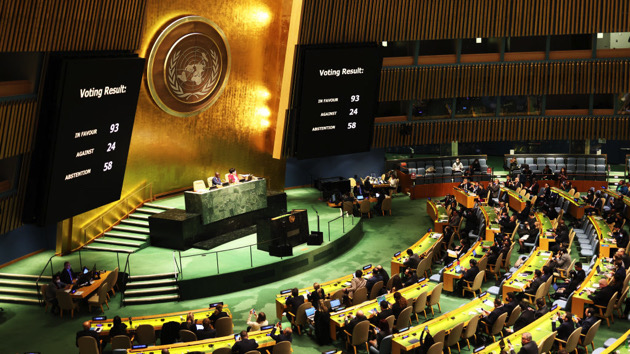 (NEW YORK) — The United Nations General Assembly on Thursday voted to pass a resolution to suspend Russia from the U.N. Human Rights Council, in response to Russian forces’ alleged killings of civilians in Ukraine.

The vote passed with 93 countries voting in favor, 24 voting against and 58 abstaining from voting. Belarus, China, Iran, Russia and Syria were among the countries who voted against the resolution.

The vote came amid global outrage over the alleged killings of civilians in Bucha, Ukraine, after Russian forces withdrew from Ukraine’s capital, Kyiv.

The UNGA needed a two-thirds majority to suspend Russia, now the second country ever suspended after the UNGA voted to remove Libya from the Human Rights Council in 2011 in response to Moammar Gadhafi’s violent crackdown on anti-government protesters.

In a speech before the vote, a Ukrainian representative urged the assembly to remove Russia from the council.

“Suspension of Russia from the human rights council is not an option, but a duty,” Sergiy Kyslytsya, Ukraine’s permanent representative to the United Nations, said.

Speaking after the vote, Russia’s deputy permanent member Gennady Kuzmin called the UNGA’s decision “an illegitimate and politically motivated step with the aim of demonstratively punishing a sovereign member state of the U.N.,” even going as far as calling it “open blackmail of sovereign states.”

He also claimed the council is “monopolized by one group of states who use it for their short-term aims,” and that “such actions violate the mandate entrusted by the international community on the Human Rights Council and overall undermine trust in this body.”

After the vote was completed, Kuzmin said Russia made the decision to end its membership with the Human Rights Council on Thursday.

James Roscoe, a UK diplomat, then asked Russia to clarify, and said, “That sounds like someone who has just been fired, then tendering their resignation.” Kuzmin responded, “I think we made a very clear statement.”

U.S. Secretary of State Antony Blinken reacted to the vote as he took the stage for a NATO press conference in Brussels.

“A country that’s perpetuating gross and systematic violations of human rights should not sit on a body whose job it is to protect those rights. Today a wrong was righted,” Blinken said during his opening statement.

U.S. ambassador to the United Nations, Linda Thomas-Greenfield, told CNN on Wednesday that they “absolutely” have the votes to suspend Russia.

“We have been working very, very hard since this war started to build a coalition of countries who are prepared to condemn Russia. We got 141 votes, the first time we went into the General Assembly. The second time we got 140. And I have no doubt that we can defeat Russia here on the Human Rights Council,” Thomas-Greenfield said.

She added: “They don’t deserve to be on the Human Rights Council.”

Ukrainian families reunite with children they say Russia kidnapped, put up for adoption

Russia to pull out of Kherson to new defensive positions