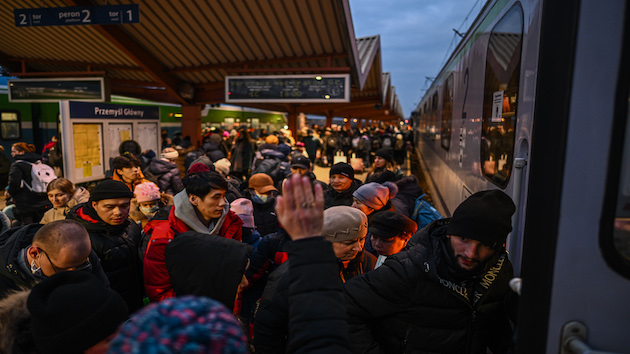 (WASHINGTON) — As Ukrainians continue to flee their homes and find safety in neighboring countries, some cities are becoming overwhelmed with refugees and are unable to provide them with the resources they need.

“We’ll continue helping. We will accept as many Ukrainians as we need to,” Rafal Trzaskowski, the mayor of Warsaw, Poland, told ABC News Live on Thursday. “But we need assistance, we need international institutions in place. We need a relocation system in Europe and in the world, because we can’t do it alone.”

More than 3 million refugees have fled Ukraine, with over half moving to Poland, according to the United Nations. Warsaw, the capital of Poland, has seen a 20% increase in its population in just a few weeks, according to Trzaskowski. He said the city has welcomed over 300,000 Ukrainians but are no longer able to improvise.

Trzaskowski is calling on the European Union and the United Nations to help set up a system, which would help move refugees in Warsaw to other cities that are less overwhelmed and can better provide the physical and psychological care that’s needed.

“I’m calling myself in the middle of the night, my friends from different cities in Poland and in Europe, and I ask them for assistance. We bus people to different places all over,” Trzaskowski told ABC News Live. “We cannot do it anymore. We need a workable system.”

Trzaskowski said it’s not just beds and food that people need, but that as time goes on, new refugees are coming in having seen more destruction and are in need of immediate mental health services.

“At the beginning, three weeks ago, people who were coming to Warsaw were taken care of by their families and by their friends. Now, people come traumatized by war. They escape rockets, they escape bullets, members of families have been killed, members of their families are stranded in basements,” he explained. “They not only need shelter, they need reassurance. They need a helping hand.”

The mayor said Poland has tried to provide a sense of normalcy for families. Earlier this week, a bill was passed in Polish Parliament to provide Ukrainian children with free education and schooling. The mayor told ABC News Live that more than 10,000 Ukrainian students are already learning in Warsaw classrooms.

“We welcome them and we treat them like citizens,” Trzaskowski said. “We provide any help we can, but there is only so much that we can coordinate.”

Trzaskowski said Warsaw and all of Poland have tried their best to help during this crisis. Polish families have stood at the border, inviting refugees into their homes, feeding people who have gone days without eating or drinking water while traveling and making them feel welcomed into the country while the war continues.

“Without volunteers, without non-governmental organizations, we wouldn’t go anywhere,” the mayor said.

He emphasized that though these efforts have been able to provide for hundreds of thousands of Ukrainians, more still needs to be done. And without a plan going forward, they will not be able to continue this effort, he said.

The mayor went on to thank the United States for providing support and said it’s made a significant impact throughout this crisis.

“I want to thank President Biden and Vice President Kamala Harris, the whole Biden administration, and the U.S. Congress for being really tough on Russia, for imposing sanctions, for treating them seriously and for those words which are ringing in our ears, which say that the United States of America will defend every inch of NATO territory,” he told us. “And just because we can feel secure, all of us in Europe, because of that statement and because of the actions of the American government, we can do our job in a peaceful manner.”

Trzaskowski added that throughout this refugee crisis, he has looked to the bravery of leaders in Ukraine, which has given him courage to produce a plan that will give every refugee a place to call home while their nation is under attack.

“If President Zelenskyy in Kyiv is not panicking, we’re not going to either,” he said.

Ozone layer on track to recover within decades: ‘We need to be vigilant’

‘We are and should be worried’ of Putin’s nuclear threat, Ukrainian general says: Exclusive