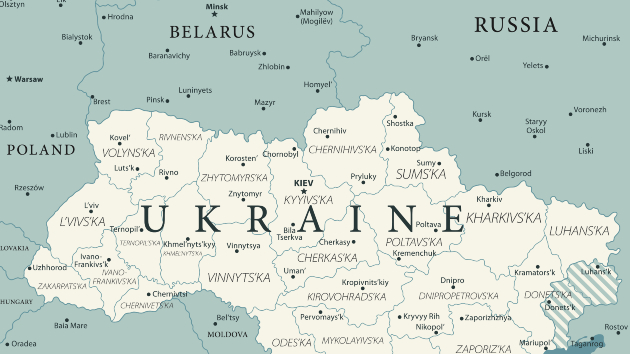 (NEW YORK) — As war in Ukraine rages on, several peace talks and increasing economic sanctions against Russia have failed thus far to stop the aggression.

Ukrainians have withstood days of airstrikes and shelling across multiple cities since the invasion began on Feb. 24. The better-equipped Russian military has shown no signs of de-escalation and has claimed to have taken control of several areas of Ukraine, though it has also been slowed by Ukrainian resistance.

How far Russian President Vladimir Putin will go, how much longer Ukrainian forces can hold out and what exactly it would take to end the conflict are key questions in the war.

“No one has a crystal ball, and it is very difficult to predict outcomes of conflict,” said retired Gen. Robert Abrams, an ABC News contributor and the former commander of U.S. forces in Korea.

Amid “unprecedented” sanctions against Russia and the stronger-than-expected Ukrainian resistance, “what appears to be happening is Putin is becoming even more resolved,” Abrams said. He pointed to threatening comments Putin made Saturday about Ukraine’s statehood, which “in plain speak means Russia is intent to invade, occupy and make Ukraine part of Russia, and erase the name Ukraine and replace it with Russia. That’s new. And that is an indication that it will be difficult to judge how far Putin will go.”

When asked at a Thursday news conference by ABC News senior foreign correspondent Ian Pannell how long Ukraine can hold out against the Russian advance, Ukrainian President Volodymyr Zelenskyy said, “I don’t know.”

One key factor in Ukraine’s fight is the level of support from the international community, including NATO, the European Union and the United Nations, Abrams said.

The United States has provided hundreds of millions of dollars in military aid to Ukraine, and millions more in lethal aid has been sent by NATO and several EU countries.

“I think there are many other things that we can do to support the Ukrainian military and the Ukrainian people,” like arms, ammunition, enhanced communications and food, Abrams said. “It’s going to require continuous and predictable resupply into Ukraine to be able to give them the means necessary to defend themselves.”

During a Zoom call Saturday with more than 300 U.S. lawmakers, Zelenskyy pleaded for more air support, including drones and planes, Rep. Mike Quigley, D-Ill., a co-chair of the Congressional Ukrainian Caucus, told ABC News Live. Quigley said the president also repeated his call for a no-fly zone over Ukraine — something experts have argued could very quickly escalate into a “World War III”-type scenario.

“To those who are advocating for a no-fly zone, we just need to all ask the question, are we prepared for the consequence — basically starting World War III?” Abrams said. “I don’t think we are, I don’t think it’s worth the risk of that sort of level of conflict, because that’s what is coming. President Putin has made it clear that anybody that intervenes militarily will be treated as an enemy. That’s not a bluff.”

“And he is prepared to escalate this conflict as high as anybody wants to go,” he continued.

Morale on both sides

Another key factor in the outcome of the conflict is how long Ukrainians can “maintain their will,” Abrams said.

President Joe Biden remarked during his State of the Union last week that the Ukrainians’ “fearlessness, their courage, their determination, literally inspires the world.”

Zelenskyy has been a key part of maintaining morale, Abrams said.

That connection can help Ukraine prevail, he said, though “we’re in for some very, very difficult, tough days and tough images, for those of us outside looking in.”

Meanwhile, Russia’s military, though superior, has been dogged by logistical challenges, including food and fuel shortages, and a “lack of cohesion and discipline,” which could work in Ukraine’s favor, Abrams said.

“I think that’s the bigger picture that people really need to understand about the dynamics and what makes soldiers fight with the ferocity and intensity that we would expect to see,” he said. “It boils down to, do you believe in what you’re fighting for? And in this case, I think what we’re seeing is not necessarily extensive effects of lack of food or fuel — that certainly does have a role to play — but I don’t think the Russian military believes in what they’re fighting for.”

The “Russian playbook” indicates that its military will continue to bomb and shell Ukrainian cities and “choke them out,” according to Abrams — pointing to Aleppo, Syria, and Grozny, Chechnya, as examples — in order to take over and instate its own puppet government.

The international community, in particular NATO members, has been closely watching the conflict in hopes of preventing it from escalating beyond Ukraine’s borders as well.

A senior White House official told ABC News the administration has been discussing efforts to make sure Putin is not completely boxed in with no way out but to fight.

Abrams said he thinks there is a chance for a potential “off-ramp” for Russia, “but it will require compromise.”

That could look like Putin getting at least one of his demands met, such as Ukraine recognizing the two breakaway regions in the Donbas region as separate states, a guarantee of neutrality in Ukraine or a commitment that Ukraine never joins NATO.

“History tells us to end these wars, there’s always going to have to be compromise, because I don’t think we’re going to find either side giving unconditional surrender. That’s the other alternative, and I think that’s highly, highly unlikely,” Abrams said.

Though much remains unclear at this time, two things are certain, Abrams said.

“I think we can be certain that the vast majority of the cities in Ukraine are likely to be decimated and destroyed,” he said. “I say that because the Ukrainian resistance, their armed forces and their people, has been so strong, so capable, and it has come as a complete surprise to the Russian military … and as a result, the Russian military has already basically taken the gloves off and they’re using what we call dumb bombs — non-precision-guided munitions, rockets and artillery — in suburban areas and housing areas, destroying civilian infrastructure.”

Additionally, the conflict is going to displace millions of people, he said. So far, over 1.5 million people have fled Ukraine, and the United Nations has predicted that 10 million Ukrainians ultimately could be displaced by the war.

“There’s nothing good coming out of this war,” Abrams said. “The stories of the courage and heroism and just the grit, the real grit of the Ukrainian people — it’s inspiring. But their country is slowly being destroyed, one village at a time.”